[UPDATED] How it started... How it's going: exhibit Alex Saab 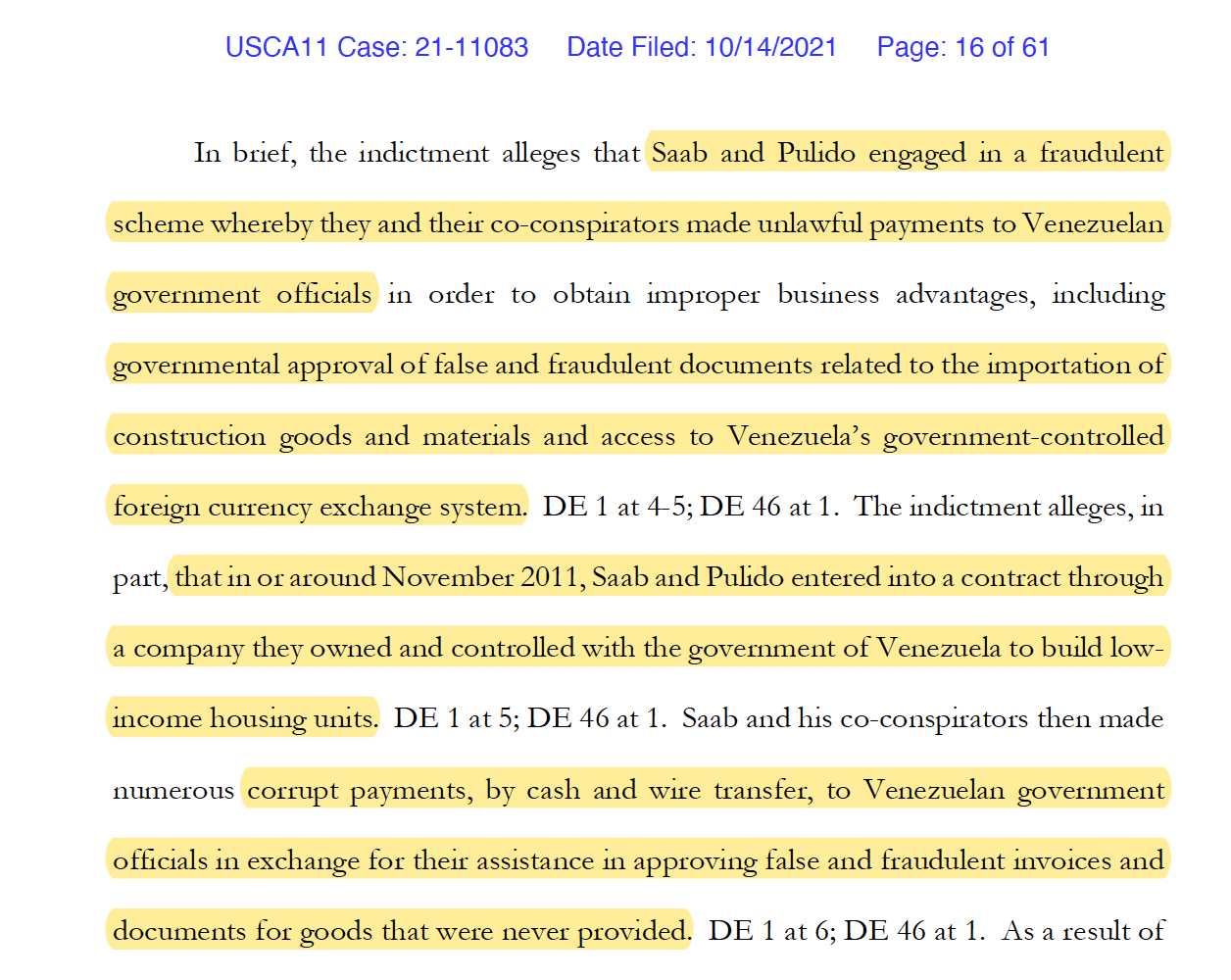 We take special pride in the fact that the criminal charges filed by U.S. Department of Justice that led to Saab's arrest (corruption and money laundering), sprang from his involvement in procurement of housing units with Fondo Global de Construcción and in foreign exchange fraud between Venezuela and Ecuador (SUCRE). This site broke that story on 24 October 2013. The investigation was then republished on 29 October 2013 by Colombia's Revista Semana in co authorship with Fanny Kertzman. Two days later, on 31 October, La W -popular radio station in Colombia- interviewed this site's editor about Saab's "business".

We also take pride on the fact that we called him a thug, since day one, tracked him down and interviewed him on 11 November 2013, another feat. Saab knew that we knew, and referred to this site's editor as a "periodista triplehijueputa" in conversation with narcosenator Piedad Cordoba. It is comforting to know that DoJ's prosecutors, whose work led to Saab's arrest, are regular readers and use this site's information to advance law enforcement.

Saab's exceptional criminal career, however, spans many sectors. Shortly after the housing units award, Rafael Ramirez announced that PDVSA was to get into imports of subsidised food. That's where Saab cemented his position, as brilliantly exposed by Roberto Deniz. His fingers where everywhere: housing, FX, infrastructure, imports, exports, mining, oil, banking... No Venezuelan Boligarch / Bolichico could cast a shadow on Saab. Not a single one of them forged the kind of omertà, or managed to accumulate the brownie points that Maduro deposited in Saab and his narco partner. In fact, some of the worse representatives of that class, second-generation type of pedigreed thugs like Francisco D'Agostino, were in Saab's employment. 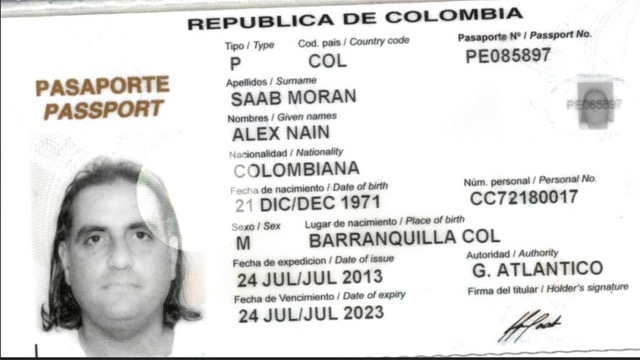 Saab epitomises not only chavismo's rot, but that of Venezuela’s. Despite being associated with a convicted head of a Colombian drug cartel (German Rubio Salas), everyone lined up to do stuff with Saab. Maduro wasn’t the only one. Oh no. Prominent opposition politicos closely associated to Juan Guaido and Leopoldo Lopez granted Congressional pardons. Cilia Flores and her very large family did plenty with Saab too. When logistics were needed D'Agostino brought his crew to provide assistance. When intros to banks were needed, the sophisticated country reps of the "most reputed" Swiss banks came rushing. Squeaky-clean impresarios seen as "apolitical" were deputised to deal with the likes of Trafigura and other Swiss trading houses. But so did Rafael Correa in Ecuador. Piedad Cordoba and Gustavo Petro in Colombia. Baltasar Garzon in Spain... Juan Manuel Santos and Maria Angeles Holguin even sat there witnessing how a completely unknown and bankrupt Barranquillero got granted in excess of $680 million worth of contracts by Hugo Chavez and Nicolas Maduro, and did nothing! Saab's reach was global. With the kind of money he was moving, there were no shut or impenetrable doors. Anywhere. This lasted the good part of a decade.

But gargantuan criminality of the sort doesn't get to live long once Uncle Sam takes notice, and notice they took. U.S. Federal Agencies were onto Saab. His U.S. visa and that of his former wife were cancelled in the late 90ies, very many years before even setting foot in Venezuela. In June 2014, this site's editor spent the best part of an hour giving U.S. law enforcement a very detailed brief about Saab's network, though Feds already knew most of it.

Every jurisdiction where he operated -save Russia, Turkey, Venezuela and, or course, Switzerland- collaborated with DoJ in reeling Saab in. Colombia's historic lax stance suddenly changed, and put him on the run. Italy, a jurisdiction that convicted Saab's partner (German Rubio Salas), also got their act together, and forced Saab and his gold digger wife to flee. However the biggest shock would come from Saab's arrest in Cape Verde, a tiny and impoverished archipelago off the coast of West Africa, through which now "Nicolas Maduro's Special Envoy" was passing en route to Iran. When Saab was arrested, his diplomatic passport was expired. A ruling from ECOWAS Court determined that "The Applicant, Alex Saab, does not enjoy any diplomatic immunity on which he relies, wherefore the grounds of his various internal and international appeals based on his supposed immunity are mere fantasy and have no correspondence with the law."

Maduro threw everything at freeing Saab. Ditto Maduro's allies. Fortunately, none of it worked.

Alex Nain Saab Moran (Saab), 49, a Colombian citizen, will make his initial appearance in federal court in Miami, Florida, today after being extradited from the Republic of Cabo Verde. Saab is charged in an indictment with laundering the proceeds of violations of the Foreign Corrupt Practices Act (FCPA) in connection with a scheme to pay bribes to take advantage of Venezuela’s government-controlled exchange rate. He is expected to make his initial court appearance today at 1:00 p.m. before U.S. Magistrate Judge John J. O’Sullivan of the U.S. District Court for the Southern District of Florida.

Specifically, on July 25, 2019, Saab was charged along with Alvaro Pulido Vargas, aka German Enrique Rubio Salas, 55, also a Colombian citizen, in an eight-count indictment with one count of conspiracy to commit money laundering and seven counts of money laundering. The indictment alleges that beginning in or around November 2011 and continuing until at least September 2015, Saab and Pulido conspired with others to launder the proceeds of an illegal bribery scheme from bank accounts located in Venezuela to and through bank accounts located in the United States. According to the indictment, Saab and Pulido obtained a contract with the Venezuelan government in November 2011 to build low-income housing units. The defendants and their co-conspirators then took advantage of Venezuela’s government-controlled exchange rate, under which U.S. dollars could be obtained at a favorable rate, by submitting false and fraudulent import documents for goods and materials that were never imported into Venezuela and bribing Venezuelan government officials to approve those documents. The indictment alleges that the unlawful activity was a bribery scheme that violated the FCPA and involved bribery offenses against Venezuela. It also alleges that meetings in furtherance of the bribe payments occurred in Miami and that Saab and Pulido wired money related to the scheme to bank accounts in the Southern District of Florida. As a result of the scheme, Saab and Pulido transferred approximately $350 million out of Venezuela, through the United States, to overseas accounts they owned or controlled.

Assistant Attorney General Polite and Acting U.S. Attorney Gonzalez commended and thanked the Government of the Republic of Cabo Verde for their assistance in the extradition of Saab to the United States. The Justice Department’s Office of International Affairs provided substantial assistance in securing Saab’s arrest and extradition, as did INTERPOL Washington.

An indictment is merely an allegation, and all defendants are presumed innocent until proven guilty beyond a reasonable doubt in a court of law.