Jose Ignacio Hernandez, the heavily conflicted "Procurador" of Juan Guaido, resigned yesterday. Hernandez's resignation letter is a study in dishonesty. No mention was made about work done for Crystallex and in case of PDVSA US Litigation Trust against Helsinge, Trafigura, Glencore et al. Hernandez should have never been appointed to that position, should have never been given access to critical information which will, very likely, end up with Hernandez's past clients. Guaido's "presidency" has been a monumental failure, plagued by corruption, but even in that fiasco Hernandez got a distinction.

Guaido squandered the best chance Venezuela has had of getting rid of chavismo since 1999. His diplomatic picks, fellow travellers, advisors and bosses are a constellation of beyond useless individuals whose only priority is personal gain. Guaido isn't even independent, he can't call any shot, without prior consent and approval of Leopoldo Lopez, Henry Ramos Allup, Julio Borges and Manuel Rosales.

Lopez and Ramos Allup imposed appointment of Hernandez. In the case of Ramos Allup, it was of particular importance, as one of his sons was a Helsinge employee. Helsinge's owner, Francisco Morillo, was some sort of mentor to Ramos Allup's sons. It was, therefore, not going to be allowed for a "prosecutor", i.e. Hernandez, to act against Ramos Allup's offspring's padrino.

Hernandez did absolutely nothing against the all pervasive corruption that has mired Venezuela in a profound humanitarian crisis, and his involvement in the PDVSA Litigation Trust case proves it. No Venezuelan prosecutor or attorney general can pretend its alleged anti corruption stance to be taken seriously when on the dime of folk like Morillo, a partner of Trafigura, Glencore, Vitol, Lukoil, etc.

In public, Hernandez boasts of his achiements and legal strategies in protecting Venezuelan assets (?) in various international lawsuits. In private, he told this site that he had nothing to do with that, as only the Attorney General's Office can make representations in cases involving the republic. Guaido does not control Venezuela's Attorney General's Office (Tarek Wiliam Saab). Hernandez's role is not that of a Prosecutor either, his appointment wasn't even legal, however that did not stop him from becoming involved, hiring legal counsel and formulating strategies in different jurisdictions.

With respect to ongoing criminal case of PDVSA against Helsinge in Geneva, Hernandez said he had recused himself and refused to clarify who was behind appointment of counsel, deflecting to Guaido's "ambassador" to Switzerland, who also refused to provide specifics. Sources have informed this site that Hernandez will transfer involvement in some of these cases to his private practice.

In Venezuela, both opposition and chavismo share a common understanding of transparency and accountability: something to be used against foes. Delcy Rodriguez is an official of a regime that not only allowed, but fostered and benefited from rampant corruption in PDVSA. Her accusation of Ramos Allup's son of associations with Helsinge is as hypocritical as Hernandez' own shrieks about chavista corruption, when only last year he was in the employ of Helsinge. Every last one of them is equally corrupt. 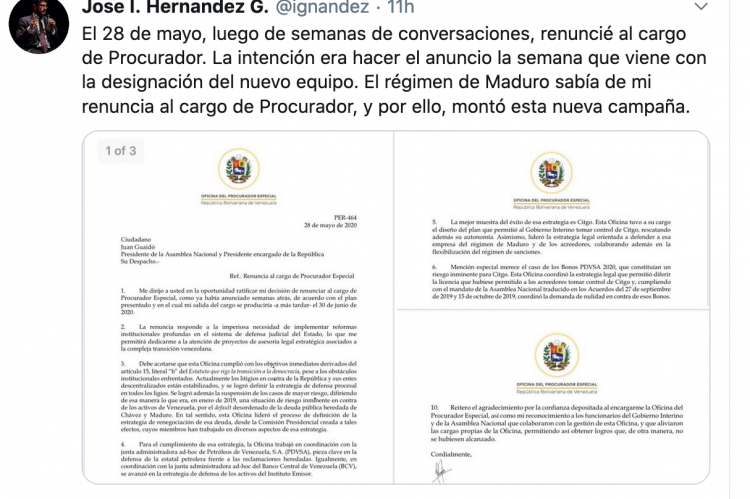