In late April, we were arguing about Alex Saab's role in Libre Abordo and latter's activities in becoming global standard in avoidance of Treasury sanctions:

"Major partners, like Rosneft and Swiss energy trading houses, sought to avoid further problems with America's Treasury and Justice Departments and have left... The race now, after Mexico's relevant registry got hacked, is to identify who are the ultimate beneficiary owners (UBOs) of Mexican shells Libre Abordo, Schlager, Richeart, and Jomadi, all of which are involved in different types of barter trade with chavismo. Some bring in food stuff and water tanks, others gasoline. All of them settle accounts with crude. Unconfirmed chatter has it that Alex Saab, a Maduro / Cilia favourite wanted by DoJ, is involved. Another name bandied about is Alex Bazzoni, of Elemento Ltd. Wilmer Ruperti also gets a mention, and he has form in "coming to PDVSA's rescue", as he did back in 2002. Another Alex (Derwick's Alejandro Betancourt) is said to be very active as well, now that his main client (Nynas) is in administrators hands."

In early May, this site argued in "Libre Abordo: Mex shell controlled by Alex Saab comes to PDVSA / Maduro's rescue":

"After Rosneft's exit, Saab's shells Libre Abordo and Schlager Business Group have become, in less than a quarter, PDVSA's largest and most important trading partners. Internal shipping data from PDVSA shows that Saab's cos have lifted over 26 million barrels of crude...  Given Libre Abordo / Schlager's near total dominance in PDVSA's crude exports and trading of late, it remains a mystery how these structures have not been added to Treasury's SDN list."

"After the OFAC designation of Rosneft Trading and TNK Trading International in February and March 2020, PdVSA leadership and regime oil minister El Aissami sought new intermediaries to facilitate the sale of PdVSA crude to buyers primarily located in Asia. Libre Abordo agreed with PdVSA to facilitate the re-sale of a significant amount of crude oil in a scheme to help PdVSA evade U.S. sanctions. Libre Abordo largely replicated Rosneft Trading’s operations, including by marketing Venezuelan oil to the same buyers in Asia, and using virtually the same routes and shipment processes. In January 2020, Libre Abordo and Schlager Business Group accounted for approximately three percent of PdVSA’s exports. By April 2020, that figure rose to almost 40 percent of PdVSA’s exports. Libre Abordo played a critical role in helping PdVSA liquidate a significant amount of its inventory and drain its limited oil storage facilities. As of May 31, 2020, when Libre Abordo claimed that it was bankrupt, it lifted and re-sold over 30 million barrels of Venezuelan crude oil."

Deputy Secretary Justin G. Muzinich added: “The illegitimate Maduro regime created a secret network to evade sanctions, which Treasury has now exposed... The United States will continue to relentlessly pursue sanctions evaders, who plunder Venezuela’s resources for personal gain at the expense of the Venezuelan people.” 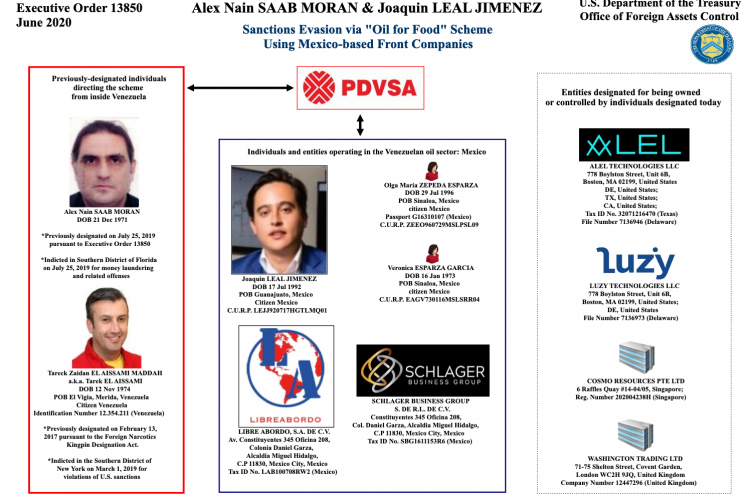