Switzerland is, of course, chock full of banks that have money laundering as an important revenue stream. Laundering proceeds of corruption has sustained many Swiss bankers over the years. But then, there are cases where aside from money laundering there's little else. We are of the opinion that Compagnie Bancaire Helvetique (CBH) is the perfect case exhibit to illustrate this point. Years ago, it partnered with Charles Henry de Beaumont, a French "banker" whose specialty was to gain clientele in places like Venezuela. Beaumont managed to embed himself very deeply in Venezuela's absolutely corrupt "business" scene. This site has been researching the largest corruption schemes executed under chavismo and, invariably, CBH is right there in the mix. First example: Derwick Associates.

Crucially, such criminal behaviour can not be excused with the bad apple argument. For Joseph Benhamou, CBH's CEO and main shareholder, was in in all Venezuela-related dodgy deals that de Beaumont was involved with. As a matter of fact, Benhamou got -personally- a $22 million "commission" for services rendered by CBH to the Oberto brothers, in the $4.5 billion money laundering scheme they set up with the assistance of Betancourt and Convit. Evidence demonstrating as much is in the hands of probing Department of Justice authorities.

Admittedly, EFG Bank, Pictet, Julius Baer, Credit Suisse, Clariden Leu, Banca Zarattini, UBS, and many other Swiss banks are also involved in Venezuelan corruption. This site will go as far as to say that nearly all Swiss bank transactions originated in Venezuela, since 1999, have an element of corruption in its inception. But while the bigger banks have legitimate revenue streams, CBH seems to be all about helping criminals launder ill gotten proceeds.

Like Banca Privada d'Andorra, a FinCEN-designated money laundering concern, CBH is rotten to the core. Benhamou, like thugs of such ilk, severed links to de Beaumont and is engaged in "philantropic" activities nowadays to cleanse his image. He even hired a former FINMA board member, surely to help with judiciary actions coming CBH's way. But none of that is going to do away with evidence of past crimes. Like what CBH did for Derwick, Gazprom, Obertos, Danilo Diazgranados, Alejandro Andrade or Nervis Villalobos. Name any boligarch touching the Swiss jurisdiction, from Betancourt (a Swiss banker in his own right) to Raul Gorrin and Claudia Diaz, and it is almost certain CBH pops somewhere in the illicit chain.

CBH's activities ought to be properly investigated. If that were to happen, its banking license would be withdrawn faster than what it takes to say thugs. 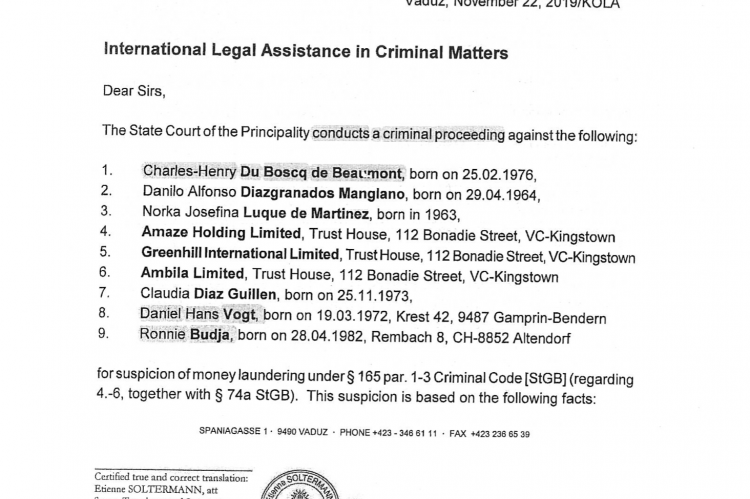