What did the Obertos sign with DoJ, to be let go?

Thus far, with respect to Venezuela, that #FinCENFiles thing has been a huge let down. Alejandro Ceballos and Samark Lopez got early mentions. Then it was the turn of Alejandro Betancourt. And today is the Obertos case, where the Miami Herald, and whoever they're talking to at DoJ, just burned the guy that was helping them unravel the gargantuan corruption that took place at PDVSA under Rafael Ramirez' leadership. As usual, the Miami Herald piece just confirms information already published here, months after the fact:

Different sources tell me Luis Oberto (thug at core of $4.5 billion #MoneyLaundering scheme w @PDVSA / @RRamirezVE) is leaving his cushy life in Miami, for #Mexico. I wonder what @SecPompeo, @USAttorneys and @TheJusticeDept have to say about that, if anything... https://t.co/lM1EKieTWy

Ceballos has been the topic of extensive investigative work by Fiorella Perfetto since beginning of 2017. Samark Lopez' little gigs with PDVSA have been known since when we wrote about #OpenPDVSA in Jan. 2016. Prior to that, we had mentioned his direct involvement in fronting for Tareck el Aissami in acquisition -with the assistance of Banesco- of Cadena Capriles in July 2014. Betancourt's side deals with JP Morgan? This site broke the news about a JP Morgan banker (Eduardo Travieso) in August 2013, who fronted for Betancourt in purchase of Onassis' former PH located at NY's Olympic Tower, with a mortgage from... JP Morgan.

We are, therefore, not very excited about "news" hash tagged #FinCENFiles coming out of ICIJ and its partners. As far as we can tell, there's nothing new. Today's Miami Herald piece, for instance, claims the Obertos had recovered their passports and were allowed to leave the U.S., where they had been sort of restricted to be in since Miami prosecutors started probing their $4.5 billion money laundering deal. That was also known, as we tweeted as much in late July.

We wonder, however, about a couple of things in today's article.

The first is: what kind of deal did the Obertos agree to with DoJ, to have managed to not only regain their passports but freedom of movement? This site has been able to compile the entire documentary chain of that $4.5 billion money laundering deal. It is more than enough to prove in a court of law that the Obertos were directly involved -along with Nervis Villalobos, Juan Andres Wallis Brandt, Rafael Ramirez, Eulogio del Pino, Victor Aular, Francisco Convit and Alejandro Betancourt- in misappropriation and laundering billions of dollars worth of public money (PDVSA's) through different banks. We know that DoJ has way more evidence than what this site has been able to get. Why were the Obertos let go then?

The second question is: what's to be gained, by DoJ and other U.S. Federal Agencies, by publicly burning the source that, according to the Miami Herald, has been "helping the federal government build criminal cases against his former compatriots"? Furthermore, in light of treatment dispensed, why would any source, however corrupt, come forward with information to assist DoJ in building criminal cases? Martin Lustgarten brought, according to the Miami Herald, "a computer hard drive that he had obtained from a former Swiss banker, Charles De Beaumont..." De Beaumont is also at the center of that probe, along with his former Compagnie Bancaire Helvetique's boss Joseph Benhamou. Again, why would DoJ be leaking information of that nature to Miami Herald journalists?

The chances of jailing the Obertos, their criminal associates and Rafael Ramirez and co look slimmer than ever. Short of the Obertos giving precise details of payments to Ramirez directly -evidence of bribes given to his proxies is already in the public domain- in order to regain their freedom, we fail to understand: why on earth would DoJ let them off the hook; and why would they punish the source that brought them the goods.

As per #FinCENFiles and the work of ICIJ, we remain skeptical that we'll be surprised by something, anything, about Venezuela's corruption that's truly breaking news. ICIJ's Venezuelan partners, a collective of "investigative journalists" known as Armando.info, are a bunch of plagiarists. Then, citing the likes of Martin Rodil, someone with very suspect connections to thugs like Danilo Diazgranados and Adam Kaufmann, as an authoritative source, hints as how "thorough" will this "investigation" be. JP Morgan, for instance, was the bank through which PDVSA, and Bariven paid hundreds of millions of dollars to Derwick Associates, read Alejandro Betancourt. PDVSA and Alejandro Betancourt have been JP Morgan's clients for many years, in the case of PDVSA, decades perhaps. Will we see any Suspicious Activity Report from JP Morgan on the $5.8 million mortgage it gave to Betancourt? 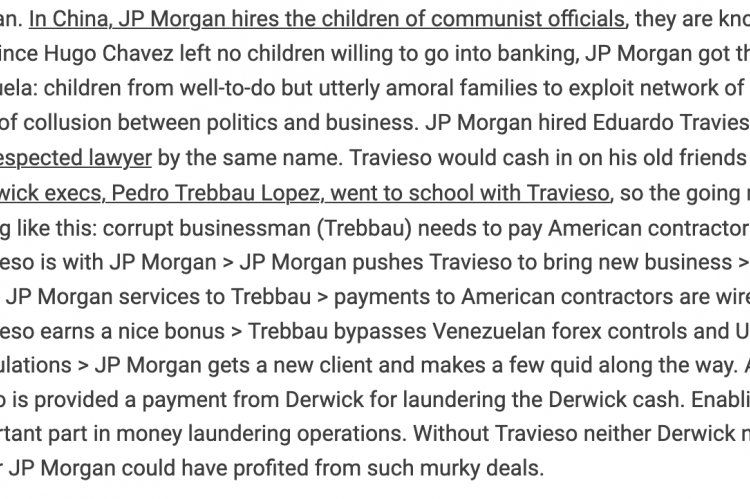