Yesterday, the U.S. Senate Committee on Foreign Relations announced passage of VERDAD, an act to "confront the crisis in Venezuela." In all the years I've been reporting on Venezuela's gargantuan corruption, this is the most promising action yet. Beyond international support and funds to help with humanitarian crisis, restoration of democracy, etc., it is section 401.d -creation of a Task Force on Venezuela with Treasury, OFAC, FinCEN, State, Defense, Justice, USAID, DEA and CIA staff- what interests us, as we have been advocating for such a measure for a while.

Take Fintech's David Martinez as example. The man has minted himself playing at the highest levels in places like Argentina, and is a veteran in the distressed debt scene. In Venezuela, Martinez lent $300 million to chavismo in 2017, on the back of bonds with a value $1.3 billion. In 2018, Martinez visited with drug kingpin Tareck el Aisami, to explore further sweet deals. There's nothing wrong with buying on the cheap and selling at profit, but there's everything wrong when the buying only comes about thanks to nepotism, inside trading and corruption.

Once upon a time, Treasury's Adam Lerrick and Martinez shared positions: Lerrick as chief negotiator of the Argentine Bond Restructuring Agency (ABRA) representing some 30,000 bondholders with exposure to $1.2 billion in Argentine debt, while Martinez's Fintech reportedly held close to $1 billion. Both sided with Argentina in opposition to hold-out creditors such as Paul Singer, Greylock Capital and Judge Griesa's stance on payments and exchange.

Both Lerrick and Martinez profited handsomely, one way or another, from their shared strategy and closeness to the Kirchners and their officials. That might have been the reason why Lerrick never got to be confirmed in his Treasury job.

Fast forward nearly five years. Lerrick's Treasury's International Affairs office remit includes Venezuela-related sanctions regime, sovereign debt being a big ticket issue. So the question I put to Treasury is: has Lerrick declared past associations with someone that very well fits targeted sanctions regime? Is Lerrick's conflict of interests here not sufficiently evident? Lerrick ought to recuse himself immediately from any further involvement with Venezuela sanctions regime and debt in an official Treasury capacity. And Martinez, who has no issue sitting down with drug kingpins and profiting from corruption, should get a visit by the task force proctologist.

Let's go back now to that Task Force on Venezuela, shall we? Martinez may have succeeded so far in preventing Lerrick's office approval of his inclusion in Treasury's SDN list, though it is almost a certainty that he will fail once State, Defense, Justice, USAID, DEA, CIA, etc. become involved. Same applies to lobbyists, PR and legal counsel of so many utterly corrupt Boligarchs that have thus far gone under the radar.

The fact that coming legislation, and a task force, is going to make corruption in Venezuela so much harder is reason for celebration. As I put it elsewhere: time's up for the thugs that have looted Venezuela, causing the largest humanitarian crisis in 21st century LatAm. To utterly choke the criminal enterprise known as chavismo, the task force should shut Lerrick / Martinez-type of jurisdictional games, and ensure allies in Western Europe and the Americas are all singing from same sheet. 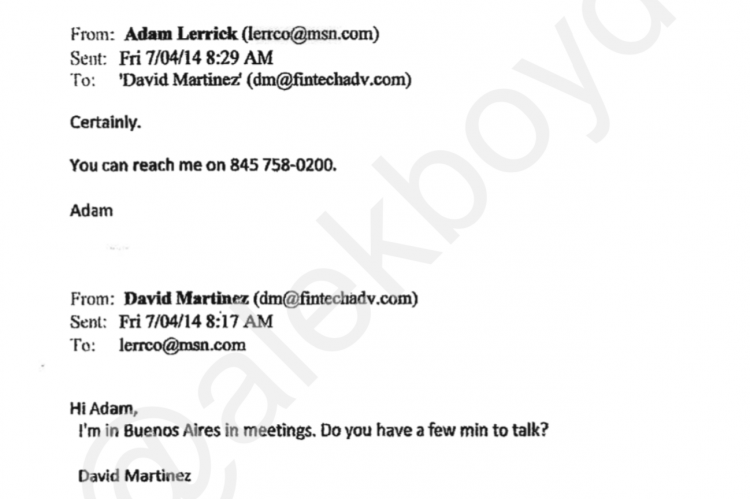