PDVSA, Venezuela's State-owned energy conglomerate, was taken over over by Hugo Chavez in 2002. Chavez realised early on that in order to succeed, his cosmic revolution would have to have unrestricted access to  unlimited funding. That is where Rafael Ramirez, the perfect yes-man, slotted right in. Upon being appointed by Chavez as both PDVSA CEO and Minister of Energy, he was in charge of supervising himself, i.e. Ramirez the Minister had to keep all activities of Ramirez the PDVSA CEO in check. This resulted in the largest looting of State resources seen in the 21st century, anywhere on earth. Over $1.5 trillion worth of income came in during Ramirez's period (2002-2014), none of which is left. Ramirez personally implemented a black economy in PDVSA, one that was fueled by corruption. From Ramirez's executive office downwards, all critical management were part of it. Legal counsel, procurement, commerce and supply, shipping and board members were controlled by folk that acted both as PDVSA's official management, and at the same time were getting hundreds of millions of dollars worth of bribes from a group of operatives hand picked and absolutely loyal to Ramirez. Some examples follow.

Carmelo Urdaneta Aqui. Official title, for a while, was PDVSA's legal counsel. Chum of Ramirez. Author of preface of some book published by Hildegard Rondón de Sansó, Ramirez's mother in law and also PDVSA's counsel. Urdaneta Aqui was, at the same time, a contractor, lending his services to (among other thugs) Nervis Villalobos, one of Ramirez's most trusted lieutenants. Villalobos (Josland Investments) and Urdaneta Aqui (Ramok Investments) entered into a "verbal contract", for which Urdaneta Aqui was to receive $5,000,000 (see images below). The nature of the contract was, basically, to OK procurement of some sort that Villalobos, as intermediary / local representative forced by Ramirez on international companies chasing business with PDVSA, would obtain. 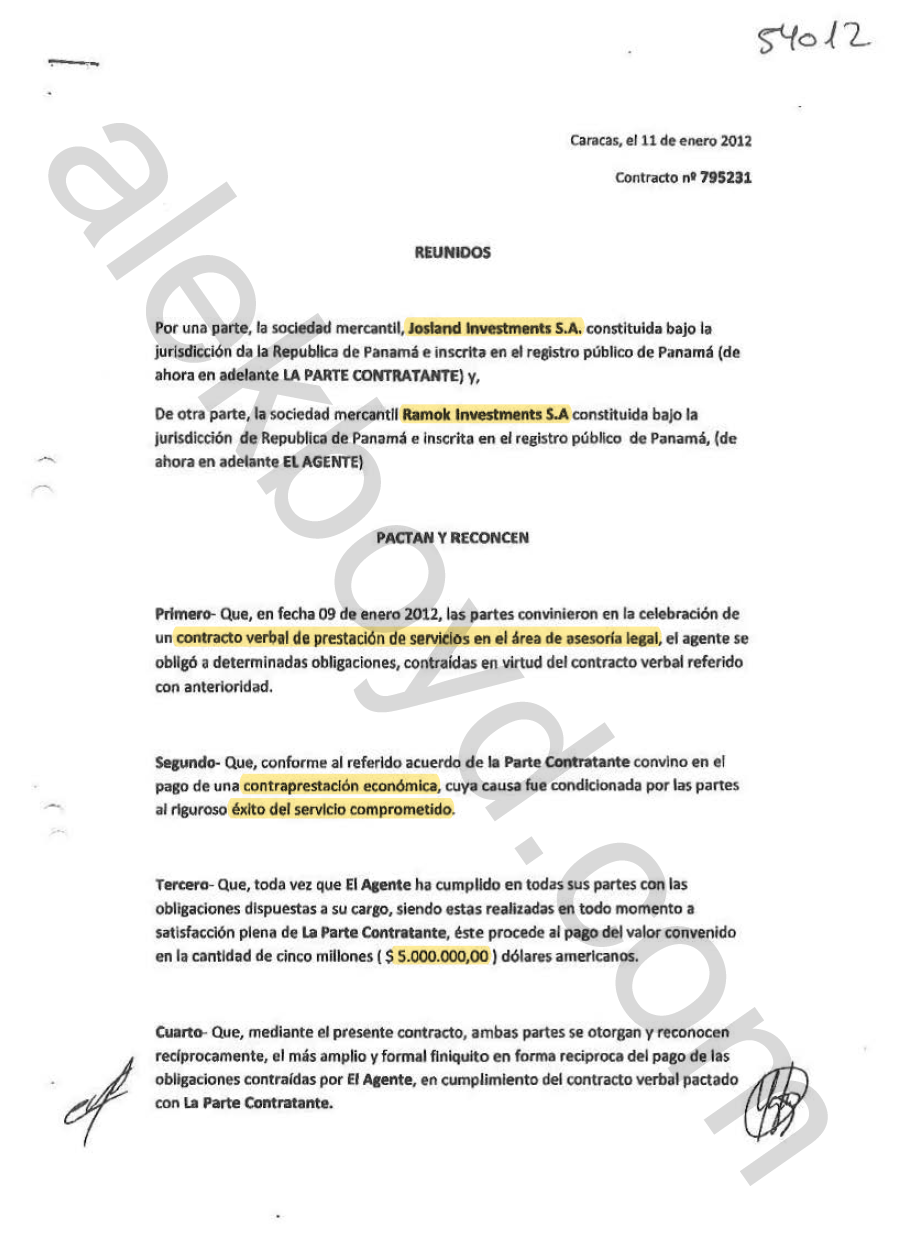 That wasn't the worst of it, of course. By that time, Villalobos had managed to get his proxy Luis Alejandro Rivero to become part of Banca Privada d'Andorra (BPA), the money laundering concern owned by Higini y Ramon Cierco. So Rivero would organize, from his alejandro.rivero@bpa.ad email account, bribe payments to Urdaneta Aqui, and to many other PDVSA staff. 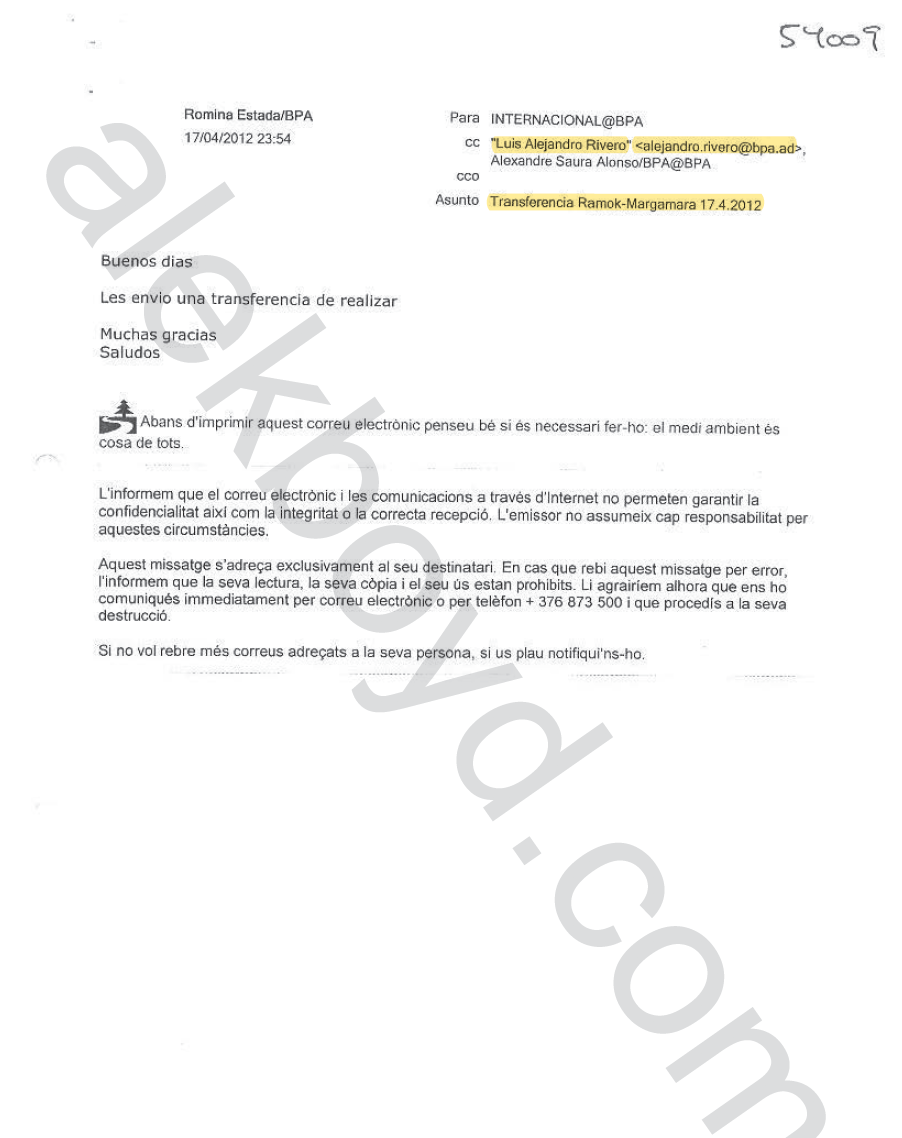 Let's recall that BPA wasn't just a bank. It had a side business called BPA Serveis, a Mossack Fonseca sort of operation which guaranteed to Villalobos-type of clients that all offshore, money laundering and KYC / complaince requirements would be taken care of.

Once Venezuelan clients were onboarded, either by Rivero or by other completely corrupt BPA staff, BPA Serveis would set up shells (bearer shares used in many cases) in the best offshore jurisdictions, from Panama to Belize.

So we see how Villalobos hires, effectively, PDVSA's legal counsel (Urdaneta Aqui), and commits to pay him $5 million. It doesn't end with the promise of payment though, as documentary evidence also shows that funds were wired to accounts controlled by Urdaneta Aqui, at BPA bank and at EFG Bank, a similar service provider favoured by chavista thugs (see below).

Another example of this black economy is the case of Javier Alvarado Ochoa, who held top management positions at BARIVEN (a PDVSA subsidiary dealing with procurement), at CORPOELEC (electricity corporation under Minister Ramirez's control). Alvarado Ochoa was good friends with former colleague Nervis Villalobos, and with Diego Salazar, Ramirez's first cousin. He is wanted in Venezuela and by the U.S. Department of Justice, though bought himself a Spanish passport -just in the nick of time- to avoid extradition to either place.

Ramirez imposed cousin Salazar as the man to deal with all insurance needs related to PDVSA. But soon that racket wasn't going to be enough, and so Salazar also became to go-to man for pre-selected Chinese corporations that were going to benefit from procurement contracts that fell under China - Venezuela multi billion dollar bilateral agreements.

A special purpose pool of funds (called "El Gran Volumen") was created, and over $20 billion were deposited in it. While head of CORPOELEC, Alvarado Ochoa entered into a contract with Luis Mariano Rodriguez Cabello, a proxy and trusted lieutenant in turn of Diego Salazar, to assist in approval of a contract to be granted to Sinohydro Corporation. Salazar's shell undertook to pay Alvarado Ochoa $18,000,000 upon CORPOELEC's successfully granting contracts to Sinohydro. 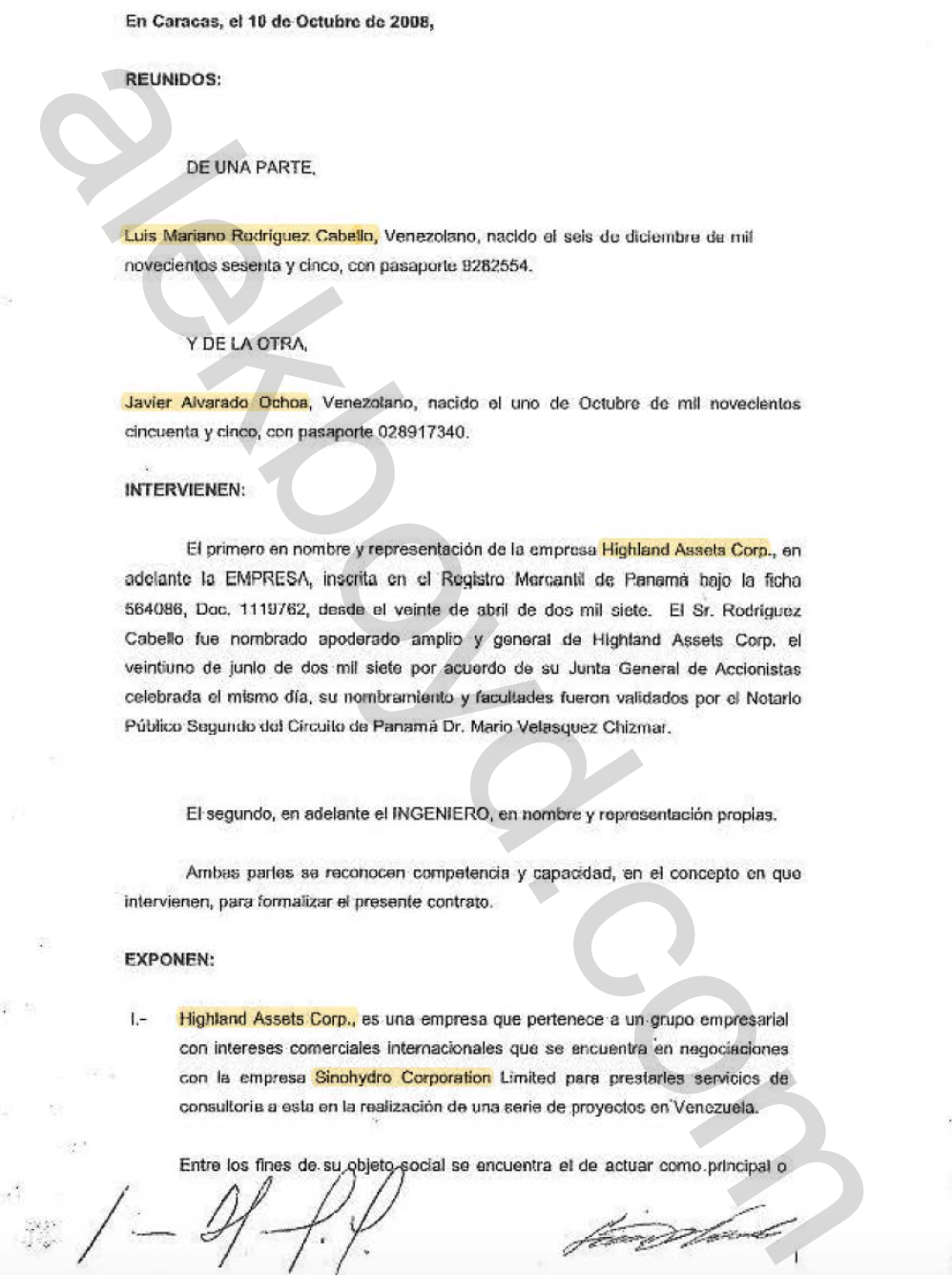 That is, the head of CORPOELEC at the time of negotiations with Sinohydro, was under contract with the man imposed by Ramirez on the Chinese to negotiate with Venezuelan institutions under his control. Decision to whether to grant contract or not were in the hands of Alvarado Ochoa and, ultimately, Ramirez anyway. That was their official remit. Still, Salazar was forced in as intermediary, just for the purpose to extract bribes from the Chinese, who, of course, were only too keen to oblige.

So Salazar gets Ramirez's cut, and Alvarado Ochoa gets another golden handshake, purely for doing his job. That's how Chavez ran the show: he ensured that everyone, everywhere was in it, so he could control the entire apparatus. Salazar and Villalobos had representation contracts with Sinohydro / Duro Felguera sort of corporations, and had also contracts with the heads of the institutions that would grant the contracts. They would then distribute the loot among participants. 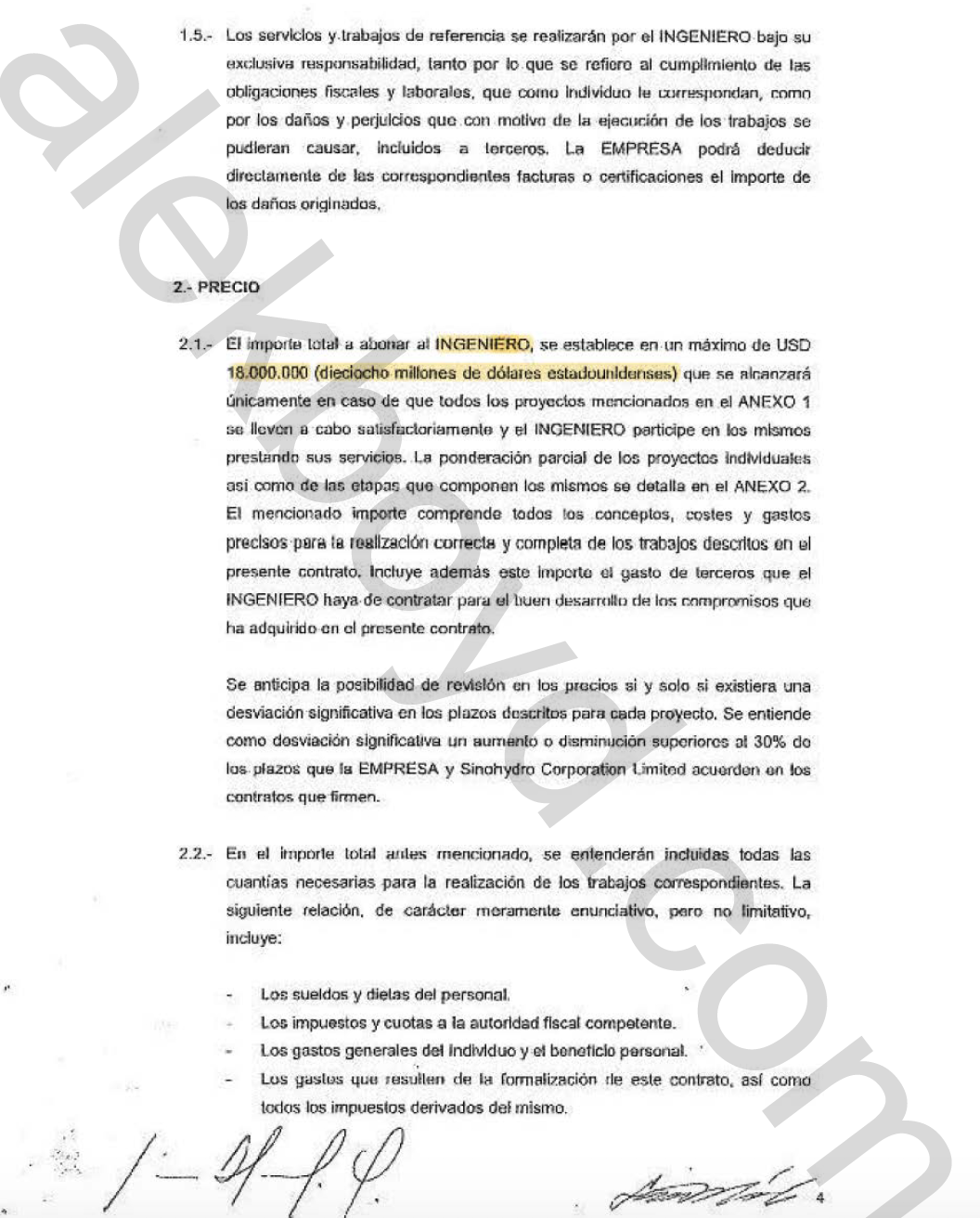 Urdaneta Aqui and Alvarado Ochoa were, by no means, the only two bad apples. Ali Rodriguez Araque, as head of CORPOELEC and right after Alvarado, also signed deals worth billions with the Chinese. Ramirez himself dared place his signature, on approval by PDVSA board of a completely corrupt $4.5 billion money laundering deal with the Obertos, and continuously claims that he never engaged in corruption. That decade of imposing bribes on all deals is what allows Ramirez to cover legal fees of Abbe Lowell, stay ahead of investigating authorities around the world, and live in the lap of luxury without having to work nowadays. 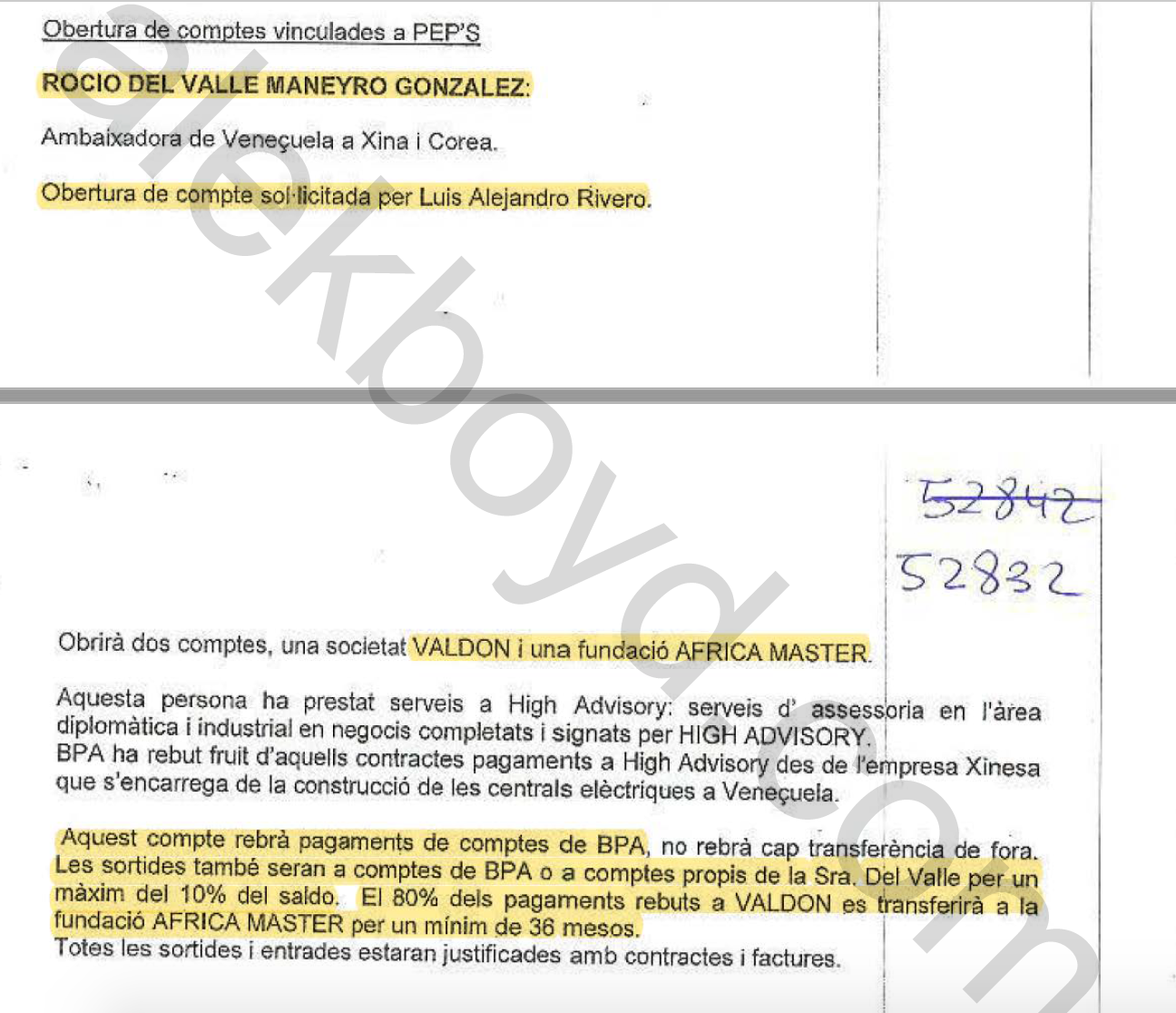 Bribes weren't only distributed among PDVSA staff though. For Ramirez also ensured that his B-team kept other officials and Chavez's diplomats happy. This was without a doubt, on Chavez's orders. One example already exposed in the past was that of Rocio Maneiro, current chavista ambassador to the UK, formerly in China. Maneiro was in Salazar's payroll, basically for liaising between China's pre-selected thugs and its Venezuelan counterparts. There's a contract where Salazar undertakes to pay Maneiro $15,000,000 for her services.

Another was Miguel Antonio Gomez Nuñez, Chavez's ambassador to Daniel Ortega, who was kept for years on a $25,000 / month retainer.

The corruption is just endless, and it is the glue that keeps chavismo to this day. The entire chavista 'government' is one monumental den of corruption. Ramirez kept former colleagues like Villalobos, colleagues Eudomario Carruyo, Eulogio del Pino, Asdrubal Chavez and Victor Aular, close family like cousins Salazar and Luis Bastidas Ramirez, brother in law Baldo Sanso, mother in law and wife, his three brothers, uncle Egly Ramirez, personal assistant, bodyguard... every single person in his circle is involved. But Ramirez was Chavez's messenger boy, no more no less. Nicolas Maduro was another such figure, and what he's done with Alex Saab, for instance, is just a replica of what Ramirez did. Diosdado Cabello leads another such tribe. Jorge and Delcy Rodriguez, another. Tareck el Aisami, another...

These thugs control money flows, ergo control Venezuela, its politics, business, military, opposition, etc. No change will ever come if corruption is not addressed. 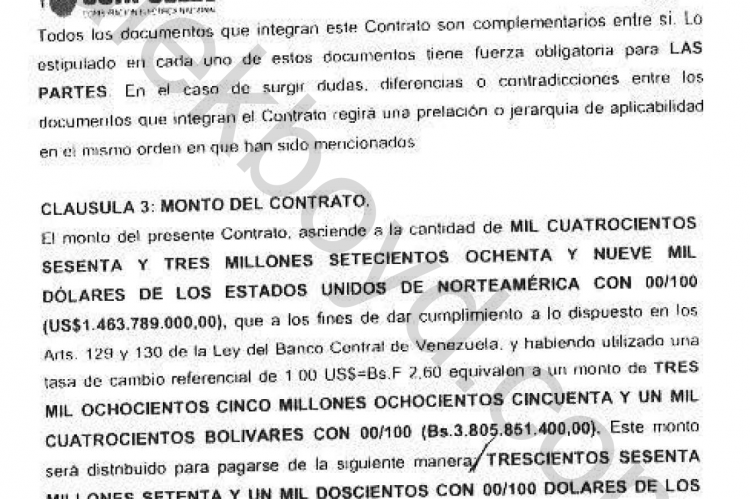