In late October 2013, this site reported about Venezuela's largest media acquisition no one had heard about:

The board informed that Latam Media Holding was owned by "Hanson Group" (read Hanson Asset Management), allegedly an "English company with interests in Europe, Asia and America." Robert Hanson, founder and CEO of Hanson Asset Management is part of the new board, as well as Patrick Teroerde, a German national working for Hanson.

Cadena Capriles was a conglomerate of newspapers, radio, and magazines. Styled in tabloid format, Ultimas Noticias (largest newspaper in country) was a very successful business. For years -due to audience of mainly poor folk- it was chavismo's favourite outlet, where it kept printing tonnes of propaganda. Cadena Capriles was controlled by Miguel Angel Capriles Lopez, aka Michu. Again the most powerful Venezuelan "businessman" no one ever heard about. In perhaps the largest private company fraud ever perpetrated in Venezuela, assisted by some of the country's most reputed lawyers, judges, and, ultimately, chavismo's highest office, Michu eventually became the Venezuelan equivalent of Rupert Murdoch, stealing from rightful owners north of $700 million.

Then, in late 2013, Cadena Capriles was, suddenly, "sold" to London's vane socialite Robert William Hanson and his German lieutenant Patrick Teroerde. Needless to say that neither Hanson nor Teroerde had any exposure whatsoever to Venezuela, or its media, before that. Completely out of the blue, the two showed up, and "purchased" Cadena Capriles from Michu. To oil the acquisition and smooth things out, Michu brought along to the deal Victor Vargas, Carlos Acosta Lopez René Brillembourg Capriles, Pedro Rendón Oropeza, Diego Lepage Gimón... that is, Vargas, a "banker" that had no previous interest in media either, intermediated -without ulterior motive- between Michu on the one hand, and Hanson and Teroerde on the other.

Thanks to recent interventions bankrupcies of Vargas' banks in Curaçao (Banco del Orinoco - BONV) and Panama (ALLBank), we now know more about his involvement, and that of Hanson and Teroerde. Internal BONV documents show Hanson and Teroerde as clients of Vargas' BONV. Moreover, in a quick-succession series of  transactions, in late March 2017, Hanson Holland 2 BV wired €84.5 million to its own-named EMIRATES NBD account, managed by Noor Capital PSC.

Armando Capriles is, of course, nephew and close associate of Michu. It is not coincidental that he is involved with Couriol, as he has been -since the late 80ies- involved in all manner of "creative" financial set ups to loot public funds in Venezuela. Capriles is a trusted el Aissami operative, and is partner of übermenschen Danilo Diazgranados and Moris Beracha.

Beyond Delcy Rodriguez's admission as to connection of el Aissami with Cadena Capriles' acquisition by Hanson, sources have informed this site that el Aissami has a stash managed through Noor Capital. It has now been revealed that Hanson is, as per BONV's internal transactions information, managing €84.5 million worth of its "investments" in Noor. So whose money is it? 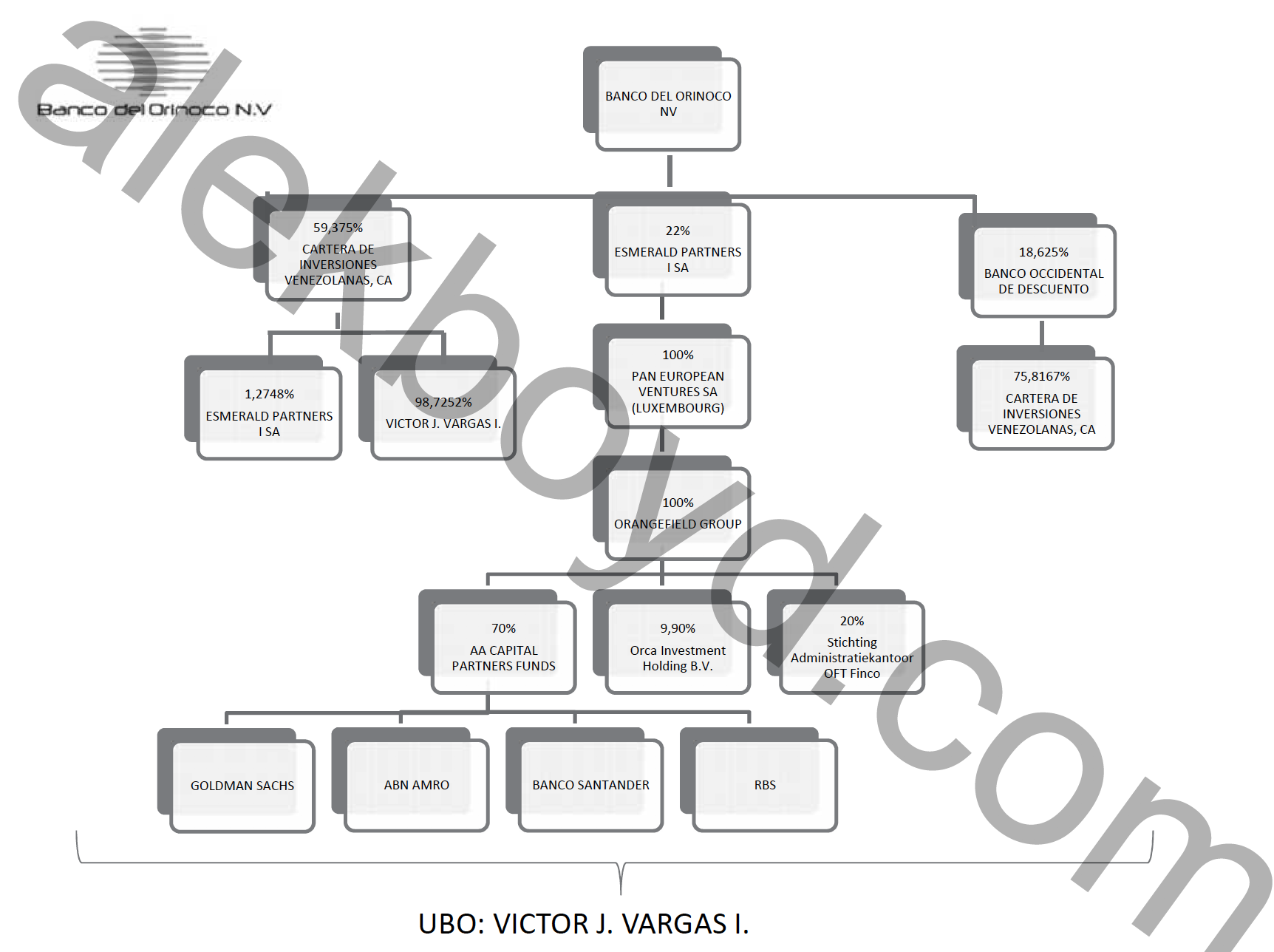 Ernst & Young (EY) was recently "engaged by the Centrale Bank of Curacao and Sint Maarten (CBCS), by Agreement Letter dated 2 January 2019 and Statement of Work dated 2 January 2019, to conduct an independent review and validation of investments held by a financial institution, Banco del Orinoco N.V. (BONV), with the various foreign custodians responsible for the management of BONV’s investment securities."

A scathing report (by EY!) seen by this site, contains information about TMF Group H Pte. Ltd., parent of TMF Curaçao N.V., mentioned above as Latam Media Holding's sole director. Recall that Latam Media Holding was the shell created by Hanson in Curaçao to execute the acquisition of Cadena Capriles. EY's report indicated that TMF was engaged by Vargas' Cartera de Inversiones Venezolanas:

TMF also operated another custodial account for Cartera De Inversiones Venezolanas C.A entitled Portfolio B – Account #358365-795. It is our understanding that Portfolio B contained investment securities held by third parties and as such, was not included within BONV’s investment security portfolio as reported to CBCS.

According to the TMF investment security confirmation statements, the balances of the two portfolios as at 31 December 2018 was:

Vargas' banks money laundering service to Cilia Flores' niece was recently revealed by this site. It is now evident that Vargas' connection and services to Robert Hanson and Patrick Teroerde places him in the immediate vicinity of Tareck el Aissami, just too close to deny.

Michu, and his nephew Armando Capriles, are living large most of the time in, you guessed it, Spain. Michu, in particular, has become the "king of Madrid's luxury real estate", as local media "reports" on his activities. Such PR, which somewhat always fails to mention source or legitimacy of funds being laundered through real estate, has to be taken with a healthy dose of skepticism. For El País' parent group (Grupo Prisa) has Adar Capital Partners Ltd, read Diego Marynberg, as a 7.29% shareholder (p. 53). Marynberg, involved in much corruption in Venezuela with wanted fugitives, happens to be another client of Vargas at BONV.

Until Robert Hanson, or his sidekick Teroerde, come clean and show whose money they're managing through Noor Capital, and given past involvement in fronting for Tareck el Aissami in acquisition of Cadena Capriles, it is safe to conclude that it is very likely Tareck el Aissami's money. That places Hanson and Teroerde as money launderers of a wanted, OFAC-sanctioned drug trafficker, involved in terrorist activities, and ought to be within the purview of the UK's National Crime Agency and Serious Fraud Office. Nothing the London pinstripe brigade would normally scoff at, though considering U.S. Government's push of late to curtail Maduro's money movements, it is certainly something the Treasury Department would look into with great interest.

UPDATED 15/11/2019: right on cue, after posting this article yesterday, the Central Bank of Curaçao and Saint Martin ruled yesterday that Banco del Orinoco is now officially bankrupt. Earlier December 2018 claim in this site suggesting BONV was a Ponzi with a $1 billion hole, has been sort of corroborated in the Central Bank of Curaçao ruling: it was $900,000,000. It remains to be seen whether financial authorities will look into Vargas' other accounts at Julius Baer, HSBC and Credit Suisse. Though the issue, for Vargas, remains: if drug money parked in his banks went to pay for polo horses, pneumatic women and upkeep of fleet of planes and yatch, and is not returned, his days are counted. 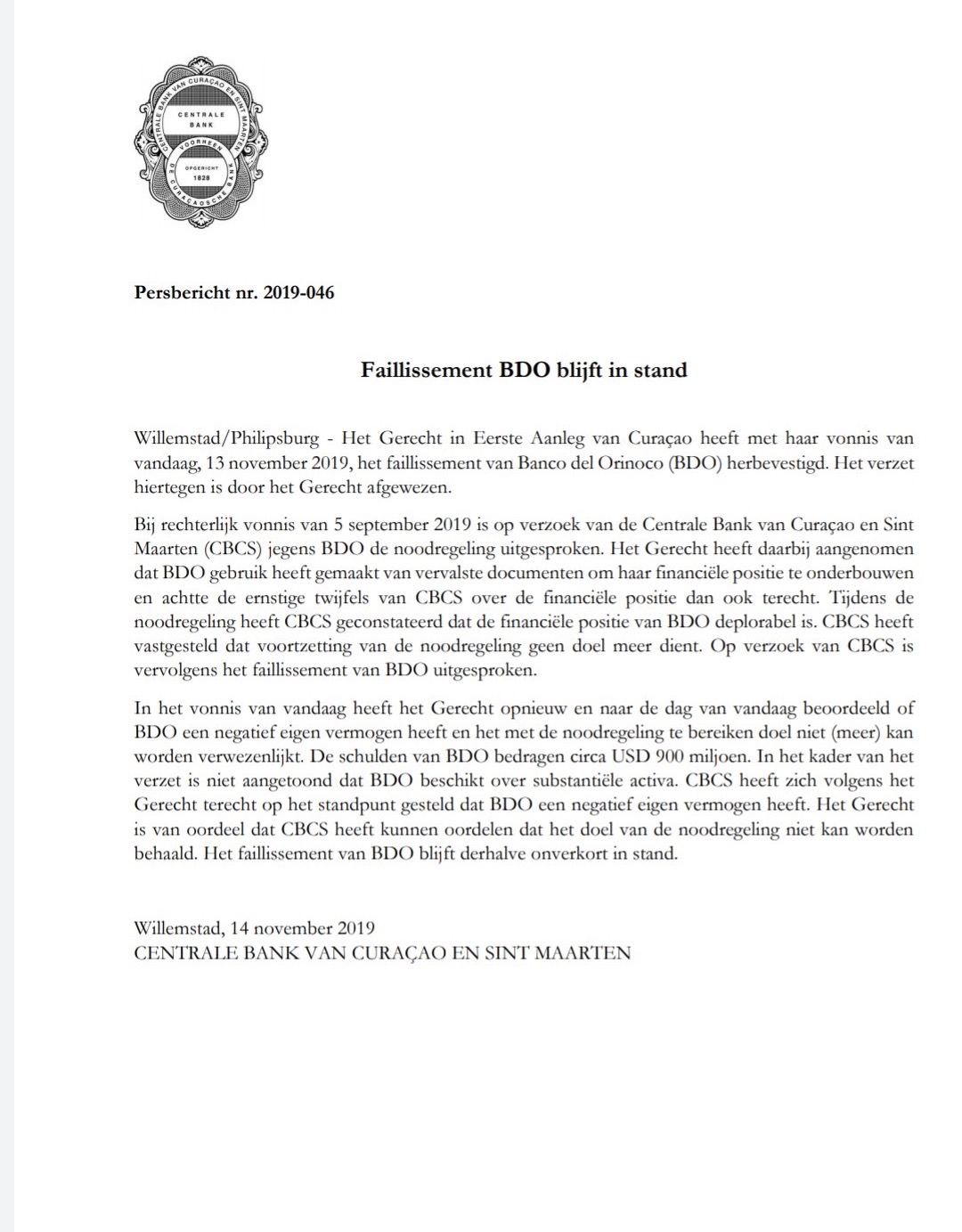 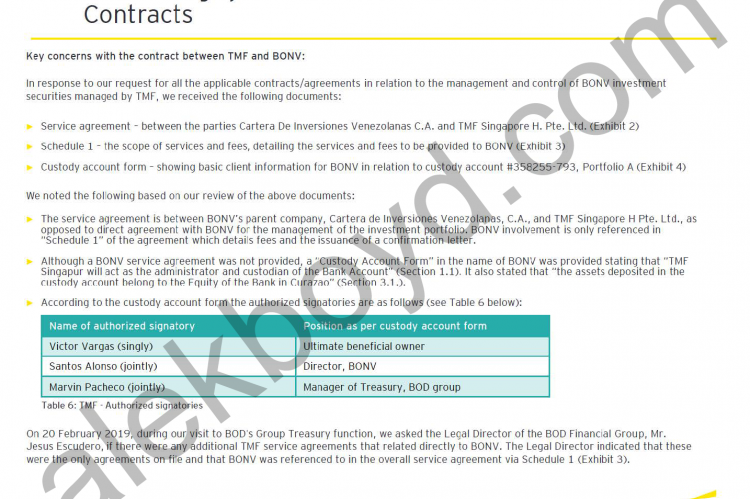