In the course of law enforcement work, U.S. Federal Agencies would seek information and meet with about anybody, if it potentially advances their agendas. Take Alex Saab, for many years Nicolas Maduro's favourite proxy and someone who went from bankruptcy to multi billionaire status much faster than Elon Musk. Saab was on the DEA's radar for a long time. Saab's partner in every last corrupt deal in Venezuela was a former head of Bogota's drug cartel. The DEA and the FBI sat with Saab in Colombia and other non-U.S. jurisdictions to, allegedly, get his collaboration. It is unknown what the exact goal of turning Saab was, though U.S. Federal agents met the man three times, until it was evident that no collaboration was ever going to be forthcoming. But there are other less known Venezuelan criminals wanted by U.S. law enforcement that have managed to stay ahead of whatever the U.S. Department of Justice (DoJ) has in store. Nervis Villalobos is a very good exhibit.

Villalobos was once upon a time a legitimate chavista official (Vice Minister of Energy among other things). For a very long time Villalobos was also one of Rafael Ramirez's (Venezuela's Oil Minister and CEO of PDVSA) most trusted lieutenants. In that capacity, Villalobos brought a lot of business to Ramirez. All of it corrupt. Derwick Associates -the shell headed by Alejandro Betancourt and Francisco Convit that managed to get billions worth of deals from PDVSA, Bariven, Corpoelec and other public institutions in Venezuela- hired Villalobos as early as January 2010, as this site revealed in Sep. 2017. The remit of the contract between Villalobos and Derwick was simple: generate business with any and all (utterly corrupt) Venezuelan institutions.

Villalobos didn't work alone. He counted on Javier Alvarado Ochoa, another once-legitimate chavista official (head of Bariven and Corpoelec), who had also been "retained" by Derwick. As luck would have it, Alvarado Ochoa's son went to school with the Derwick thugs and made necessary intros that -come the power emergency decrees of 2009- landed Derwick the first set of no-bid contracts from daddy. That, however, was by no means the last of Villalobos' and Alvarado's sweet deals with Derwick. After the electricity contracts, oil concessions, joint ventures with PDVSA, and the largest money laundering schemes in the history of Venezuela followed. Villalobos and Alvarado were at the core of it all. So was, of course, Ramirez, who sat at the very top of the pyramid of corruption that bankrupted Venezuela.

Eventually, U.S. Federal Agencies and DoJ caught up with Villalobos, Alvarado and Derwick. Probes were launched. Some meek charges were filed. Both Villalobos and Alvarado ended up being wanted by DoJ. But by this time, all could count on the services of a former New York prosecutor (Adam Kaufmann) and his sidekick: Martin Rodil.

Rodil has been kept for many years -by U.S. Federal Agencies- as some sort of paid informant according to people familiar with his affairs. A fawning Bloomberg profile of Rodil presented him as "the go to guy" when it came to "bringing" Venezuelan criminals to "collaborate" with U.S. law enforcement.

Rodil was recently in Spain's news report for leading an international extortion ring. Well placed sources commented to this site that Rodil had some kind of altercation with Frank Holder, another "informant" kept by Federal Agencies equally implicated with some of the most unsavoury chavistas. A recently released phone conversation between Rodil and Alvarado -in the context of a Spanish court summons presented to Villalobos- shows how this shadowy world of informants upon whom U.S. law enforcement rely actually works.

Rodil can be heard warning Alvarado that Villalobos has been called as a witness in criminal proceedings in Spain. Rodil goes beyond and cautions Alvarado, saying that if law enforcement gets close he needs to flee that jurisdiction immediately. Alvarado sounds somewhat at ease, claiming he entered Spain via another capital and if needs must he can disappear just as easily for, in his view, Spanish law enforcement has no clue he is there. Rodil goes on to promise that he'll take the issue to his contact Bonifacio Díez, in turn one of the most corrupt senior police officers in Spain.

Rodil charged huge amounts (millions according to news reports) to the likes of Villalobos and Alvarado, to keep them ahead of criminal probes in different jurisdictions. This he did while being retained by U.S. Federal Agencies trying to get their hands on his very clientele. Like Saab, Rodil's humored agents so that he could then use gathered intel to advance his protection business. Villalobos was a client. So was Alvarado. The questions however are: who else has retained Rodil, and who has helped him? By his own claim, it is now known that his connections in Spain reached the very top. How about in the U.S. though?

Kaufmann, Rodil's unofficial associate, has been for years doing a similar job for Derwick. Derwick itself, through Alejandro Betancourt, has kept the counsel of Rudy Giuliani, Fusion GPS, and a whole array of the "very best and finest" counsel ill gotten money can buy in America. This might explain why, to this day and despite all thoroughly documented evidence of his involvement in multi billion dollar corruption, Betancourt keeps his freedom. Ditto Rafael Ramirez. The totally corrupt Conservative government of Boris Johnson certainly will not chase Betancourt out of his London palatial residence. In Spain, where the Attorney General is controlled by one of Saab's protectors (Baltazar Garzon), nothing will ever happen to Betancourt either.

The fight against global corruption is an asymmetric war. On one side there's law enforcement, understaffed, underfunded, unmotivated, hampered by all kind of jurisdictional constraints, ill equipped to deal with the degree of sophistication and power the criminal underworld has. On the other there's the Villalobos, Alvarados, Ramirezes and Betancourts of this world. With hundreds of millions / billions at their disposal, they can hire anyone, anywhere. They can disappear at a moments notice. Unlike law enforcement, they are not encumbered by jurisdictional issues, flight schedules, border constraints. They have a vast amount of resources law enforcement can’t even get to, and through Rodil-like characters they know what's coming. Their power was best exemplified by Rudy Giuliani's private meetings with former U.S. Attorney General Bill Barr: don't move against Betancourt because he is a "matter of national security".

When the cogs that keep the judiciary running can be stopped with just a phone call from up high, when media can be silenced with one letter, when evidence can be made to disappear by paying a corrupt cop, when court actions can be neutralised with political arguments of "natiional security", there is little hope justice will ever catch up. It did with Saab, but that was a fluke. The rest of those mentioned above continue going about their lives in complete peace and freedom. Everyone, but law enforcement, seems to know where they are, what they’re doing and how they came about their "wealth". That very unquestioned wealth is their superpower, is what protects them. Barring an unmissable war of aggression, there is nothing regular law enforcement can do against these people. Yes, a yacht can be seized and a couple of accounts in certain banks frozen. But if there’s one thing that the über criminals of this world and their advisors know how to do well is to hide money. And with money, against such inept and corrupt opponents, is how wars are won. 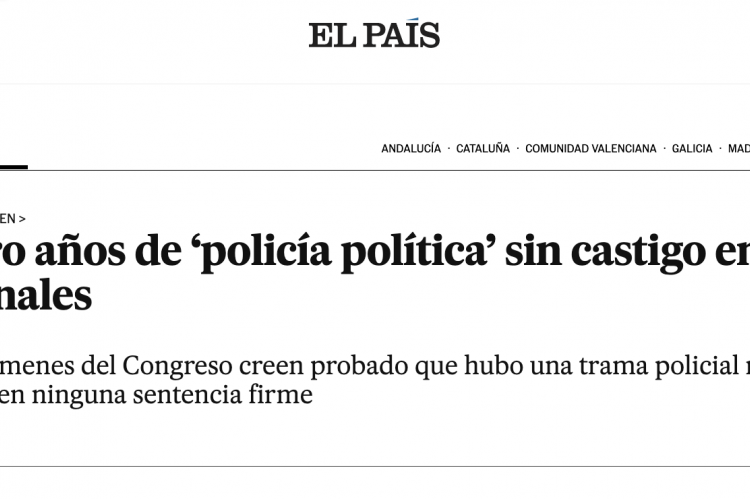