Florida Senator Rick Scott would like to portray himself as some sort of ethical guardian of what's good and proper when it comes to legal representation retained by chavista thugs in America. His protestations in this respect started with a public letter to Foley & Lardner, where he claimed: "It has recently come to my attention that your firm was hired by Inspector General Reinaldo Muñoz, the top lawyer for Nicolas Maduro’s brutal regime in Venezuela. This is shocking news considering the absolute genocide Maduro is committing on his citizens. He is a thug and a dictator who is murdering children and starving his people. No business in the United States should have any contact with Maduro’s government, let alone willingly take money to lobby on its behalf." Senator Scott is absolutely right, on a couple of things there, but his vocipherous and very public claims come across, to this observer at least, as utterly hypocritical.

Maduro is most definitely a thug and, indeed, he leads a regime that can only be described as brutal. Maduro could not care less about the plight of Venezuelan citizens, and won't lose any sleep if everyone outside the nepotistic circle he and Cilia have built around themselves drops dead this instant. In that, Senator Scott is right.

Two days ago Senator Scott fired another salvo, and it addressed it to AG William Barr and Treasury Secretary Steven Mnuchin. The target now is two-man outfit Amsterdam & Partners LLP. In this instance, Sen. Scott stated "I called on Foley & Lardner to stop working for Maduro and they heeded that call in early February. I was recently troubled to learn that the firm Amsterdam & Partners LLP has picked up the shameful mantle of lobbying for the Maduro dictatorship. Amsterdam has even publicly stated it would not file a FARA registration statement, a mandatory disclosure whenever agents of foreign principals are retained to engage in political activities specified under the statute."

Amsterdam quickly turned this into opportunity, and got the other half of Amsterdam & Partners (Andrew Durkovic) to protest with a "counter" letter, addressed to the International Commission of Jurists, where they wax lyrical about their "pro bono work", their "focus on human rights", how they spoke against Putin, and their "multiple" visits to El Helicoide in Caracas.

Foley & Lardner can very well afford to drop Maduro. For Amsterdam though, Maduro could likely be the largest source of income in the years to come.

This is, evidently, a battle of the hypocrites. In one corner we have a Senator that has not uttered a peep about Rudy Giuliani, the unregistered lobbyist of Alejandro Betancourt  (without a question one of Venezuela's biggest thugs), associate of Nicolas Maduro, and currently under criminal investigation in two multi billion dollar cases in Florida alone. Giuliani actually met with AG Barr to lobby in Betancourt's favour. This did not elicit an outraged letter from Scott. Nor did Betancourt's retainment of Jon Sale. We are yet to see a letter from Senator Scott to Treasury's Secretary Mnuchin, warning about Giuliani's alleged Treasury lobbying -again on behalf of Betancourt according to sources- to get prohibition of trading Venezuela-issue bonds lifted.

We never saw letters from Scott when David Boies was acting in that farce of a lawsuit on behalf Reinaldo Muñoz Pedroza. We never heard the Senator decrying from his moral pulpit involvement of Juan Guaido's very own "prosecutor", as legal expert for Helsinge, Glencore, Trafigura, Vitol, Lukoil et al whose actions can only be described as totally corrupt and in detriment of Venezuela. We don't hear the Florida Senator railing against the many corrupt thugs from Venezuela that launder vast amounts of money in his state.

As per Amsterdam, well... I met the man, many years ago, in a Starbucks in St John's Wood. He didn't strike me as a beacon of rectitude and morality, or particularly clever. A hustler rather, as his CV shows. That Quixotic bullshit about pro bono work and confronting Putin, while in the employ of Erdogan and Maduro, just the mind of a completely deluded, opportunistic, galloping megalomaniac can fail to notice how irreconcilable it is to boast about human rights defence credentials, when retained by regimes whose systematic and chronic human rights abuses are known across the world.

Alas, this is what Venezuelans have to deal with nowadays. Those who support the cause of freedom for our country are as adept at turning a blind eye when it comes to their network, as those out to continue propping up the ones looting our nation. The only consistent factor across the board is this: money talks and bullshit walks. 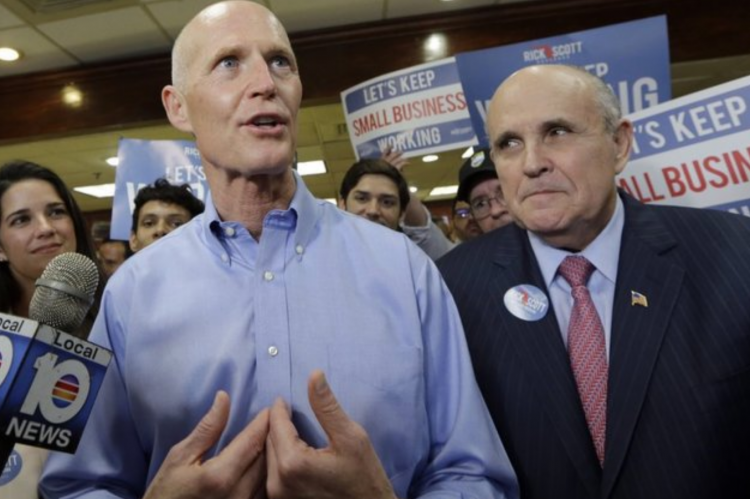