David Boies is a household name in American legal circles. He's defended the rich, the famous, the disgraced, the thugs, and everything in between. Boies' adventures in Venezuela, were it not for a long series of exposés in this website, are mostly unknown. He basically partnered with chavistas to go after a bunch of thugs that had fallen out of favour. In doing so, he created a New York trust (PDVSA US Litigation Trust), with some of his yesmen and employees, and "got" 66% of the rights of a claim -potentially worth billions- against some of the world's largest energy trading houses. And the man who provided legal justification to Boies' involvement, Reinaldo Muñoz Pedroza, has just been sanctioned by the Treasury. Boies' chavista undertaking continues though, as he is involved with PDVSA in a related criminal case in Switzerland. Take it away OFAC!

WASHINGTON – Today, the U.S. Department of the Treasury’s Office of Foreign Assets Control (OFAC) designated four key figures that have facilitated the illegitimate Maduro regime’s efforts to undermine the independence and democratic order of Venezuela. These individuals include David Eugenio De Lima Salas, Reinaldo Enrique Muñoz Pedroza, Indira Maira Alfonzo Izaguirre, and Jose Luis Gutierrez Parra. Their actions are part of a broader election interference scheme to prevent free and fair parliamentary elections from taking place in December 2020 by restructuring the National Electoral Council and controlling the state’s wealth and assets for regime purposes through the Solicitor General.

“The corrupt Maduro regime is attempting to seize control of the National Assembly of Venezuela through a fraudulent election,” said Secretary Steven T. Mnuchin. “The United States stands with the people of Venezuela, and this Administration remains committed to targeting the illegitimate Maduro regime and its supporters as they look to strengthen their grip on power.”

These individuals are being designated pursuant to Executive Order (E.O.) 13692, as amended.

Building on their fraudulent efforts in December 2019 and January 2020 to undermine the Venezuelan National Assembly, the Supreme Court of Justice (Tribunal Supremo de Justicia), controlled by officials friendly to the illegitimate Maduro regime, issued dubious legal rulings in the spring of 2020 in support of Maduro’s selection of officials to key government positions, which have oversight of Venezuela’s national wealth and assets, and election processes. The democratically elected National Assembly passed resolutions decrying these rulings as corrupt ploys to undermine the rule of law in Venezuela.

In April 2020, after addressing a request for a constitutional interpretation regarding the selection of the Solicitor General, the Maduro-aligned Supreme Court of Justice ruled that Reinaldo Enrique Muñoz Pedroza (Muñoz Pedroza) is the Solicitor General of the Republic and has all the functions of representing the Venezuelan State before national and international third parties in terms of the country’s wealth and assets. The National Assembly rejected this decision and Muñoz Pedroza’s usurpation of that office, and subsequently urged foreign courts, international arbitration tribunals, and other foreign authorities not to accept the representation of Muñoz Pedroza or attorneys appointed by him as representatives of the Venezuelan government. The National Assembly also urged competent foreign authorities to sanction Muñoz Pedroza and lawyers appointed by him for their political collaboration with the illegitimate Maduro regime, which is obstructing the legitimate defense of Venezuelan interests and the nation’s transition to democracy.

Today, Indira Maira Alfonzo Izaguirre, a former magistrate of the Supreme Court of Justice and now the Principal Rector and President of the National Electoral Council; Jose Luis Gutierrez Parra, a Principal Rector of the National Electoral Council; and Reinaldo Enrique Muñoz Pedroza, the purported Solicitor General, are being designated pursuant to E.O. 13692, as amended, for being current or former officials of the Government of Venezuela.

From November 2019 through January 2020, former Venezuelan governor David Eugenio De Lima Salas (De Lima Salas) — working with former Executive Vice President and Minister of Industry and current Oil Minister Tareck El Aissami (El Aissami) and Colombian money launderer Alex Saab (Saab) — was the leader of two vote-buying corruption schemes known as “Operation Green Briefcase” (Operación Maletín Verde) and “Operation Scorpion” (Operación Alacrán) that he orchestrated on behalf of Maduro. The Maduro regime, with De Lima Salas’s leadership, purportedly bought the votes of opposition deputies in the National Assembly in amounts of up to $1 million dollars. These bribes were made for the purpose of undermining the January 2020 re-election of Juan Guaidó as president of the National Assembly. The cash for the bribes allegedly was supplied by El Aissami and Saab’s money laundering and corruption networks, which OFAC previously targeted with sanctions.

De Lima Salas still plays a critical role in undermining Venezuelan democracy and rigging the upcoming 2020 parliamentary elections. Through Operation Scorpion, De Lima Salas, together with the Maduro-regime-aligned Supreme Court of Justice and Maduro-aligned members of the National Electoral Council, has sought to strip opposition political parties of the their ability to operate by allowing corrupt members of the National Assembly to co-opt the legitimate opposition parties’ proprietary brands, logos, symbols, and cards, with the goal of destroying legitimate opposition parties, suppressing votes, and tilting future elections in favor of the Maduro regime.

De Lima Salas, a former National Assembly deputy and former Governor, is being designated pursuant to E.O. 13692, as amended, for being responsible for or complicit in, or responsible for ordering, controlling, or otherwise directing, or having participated in, directly or indirectly, public corruption by senior officials within the Government of Venezuela.

BACKGROUND ON EL AISSAMI AND SAAB

OFAC designated El Aissami on February 13, 2017, as a Specially Designated Narcotics Trafficker pursuant to the Foreign Narcotics Kingpin Designation Act (Kingpin Act) for playing a significant role in international narcotics trafficking. At the time of his designation, El Aissami was the Executive Vice President of Venezuela. On March 8, 2019, the U.S. Attorney’s Office for the Southern District of New York charged El Aissami with criminal violations of the Kingpin Act. On March 26, 2020, Secretary of State Pompeo announced a Narcotics Rewards Program offer of up to $10 million for information leading to the arrest and/or conviction of El Aissami. On the same date, a superseding indictment was unsealed in the United States District Court for the Southern District of New York charging El Aissami with additional crimes relating to efforts to evade OFAC sanctions.

OFAC designated Saab on July 25, 2019, pursuant to E.O. 13850, as amended, for being responsible for or complicit in, or for directly or indirectly engaging in, a transaction or series of transactions involving deceptive practices and corruption and the Government of Venezuela or programs administered by the Government of Venezuela and for operating in the gold sector of the Venezuelan economy. Saab profits from orchestrating vast corruption networks that have enabled Maduro and his cronies to significantly profit from food imports and distribution in Venezuela. Through a sophisticated network of shell companies, business partners, and family members, Saab has laundered hundreds of millions of dollars in corruption proceeds around the world. On July 25, 2019, the United States District Court for the Southern District of Florida charged Saab with one count of conspiracy to commit money laundering and seven counts of money laundering for his alleged role in laundering the proceeds of violations of the Foreign Corrupt Practices Act in connection with a scheme to pay bribes. The indictment also alleges and seeks forfeiture in excess of $350 million representing the amount of funds involved in the violations.

With today’s action, the United States synchronizes its efforts with those of the Government of Canada, which placed Muñoz Pedroza and Alfonzo Izaguirre on its Consolidated Canadian Autonomous Sanctions List in 2018 and 2019, making these two individuals subject to sanctions under Canada’s Special Economic Measures Act and Justice for Victims of Corrupt Foreign Officials Act.

As a result of today’s action, all property and interests in property of these individuals that are in the United States or in the possession or control of U.S. persons are blocked and must be reported to OFAC. In addition, any entities that are owned, directly or indirectly, 50 percent or more by the designated individuals are also blocked. OFAC’s regulations generally prohibit all dealings by U.S. persons or those within (or transiting) the United States that involve any property or interests in property of blocked or designated persons.

U.S. sanctions need not be permanent; sanctions are intended to bring about a positive change of behavior. The United States has made clear that the removal of sanctions may be available for individuals and entities designated pursuant to E.O. 13692, as amended, who take concrete and meaningful actions to restore democratic order, refuse to take part in human rights abuses, speak out against abuses committed by the illegitimate Maduro regime, or combat corruption in Venezuela. 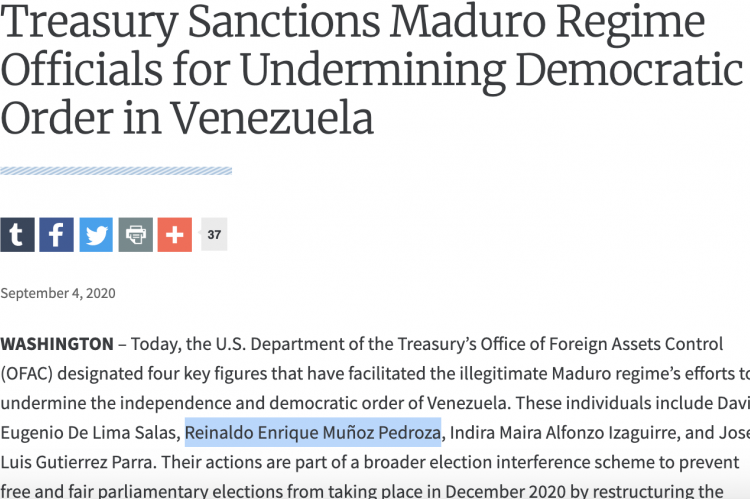