Silvain Besson reported yesterday in the Tribune of Geneva that Helsinge -the shell controlled by Francisco Morillo, Leonardo Baquero and Daniel Lutz- has been charged by Geneva prosecutor Johan Droz with corruption, money laundering and data theft. The post goes into Helsinge's operations with Swiss trading houses over a period of 14 years (2004-2017), and reiterates figures previously posted by this website as to possible size of business: $40 billion.

The fact that Glencore, Trafigura, Vitol, Lukoil, et al bribed their way to obtain favourable deals from PDVSA is not surprising, for that's exactly what they do everywhere they operate. Neither it is the alleged amount ($40 billion), for none of the "successful" offsprings of Mark Rich's Trading School have grown to current size by conducting legitimate businesses. Corruption is what Swiss trading houses bank on. Corruption is what they seek in all the jurisdictions where they operate. Corruption is their business model. This site actually takes issue with Besson's comments about what a good trader ought to be: it is not to be smarter than the competition, but rather to be able to out-corrupt the competition.

A race to the bottom characterises Rich's "how to out-corrupt the competition" business model. In such league, a country like Venezuela -with its abundance of resources managed by the State, "governed" by chavismo and inhabited by an "entrepreneurial" class like Morillo's, Baquero's and Lutz's boliburgeoisie- just could not get any better, or more "profitable".

Morillo's role was, in short, to corrupt key PDVSA people, so inside information on bids/tenders could then be offered to the likes of Trafigura, Glencore, Vitol et al, which were only too happy to entertain Morillo in a 14-year long game of "out-corrupting" the others. In all, $40 billion, but that's only through Helsinge, as Besson's rightly claims a company "...qui ne comptait qu’une poignée d’employés", that is a shell with only a handful employees. 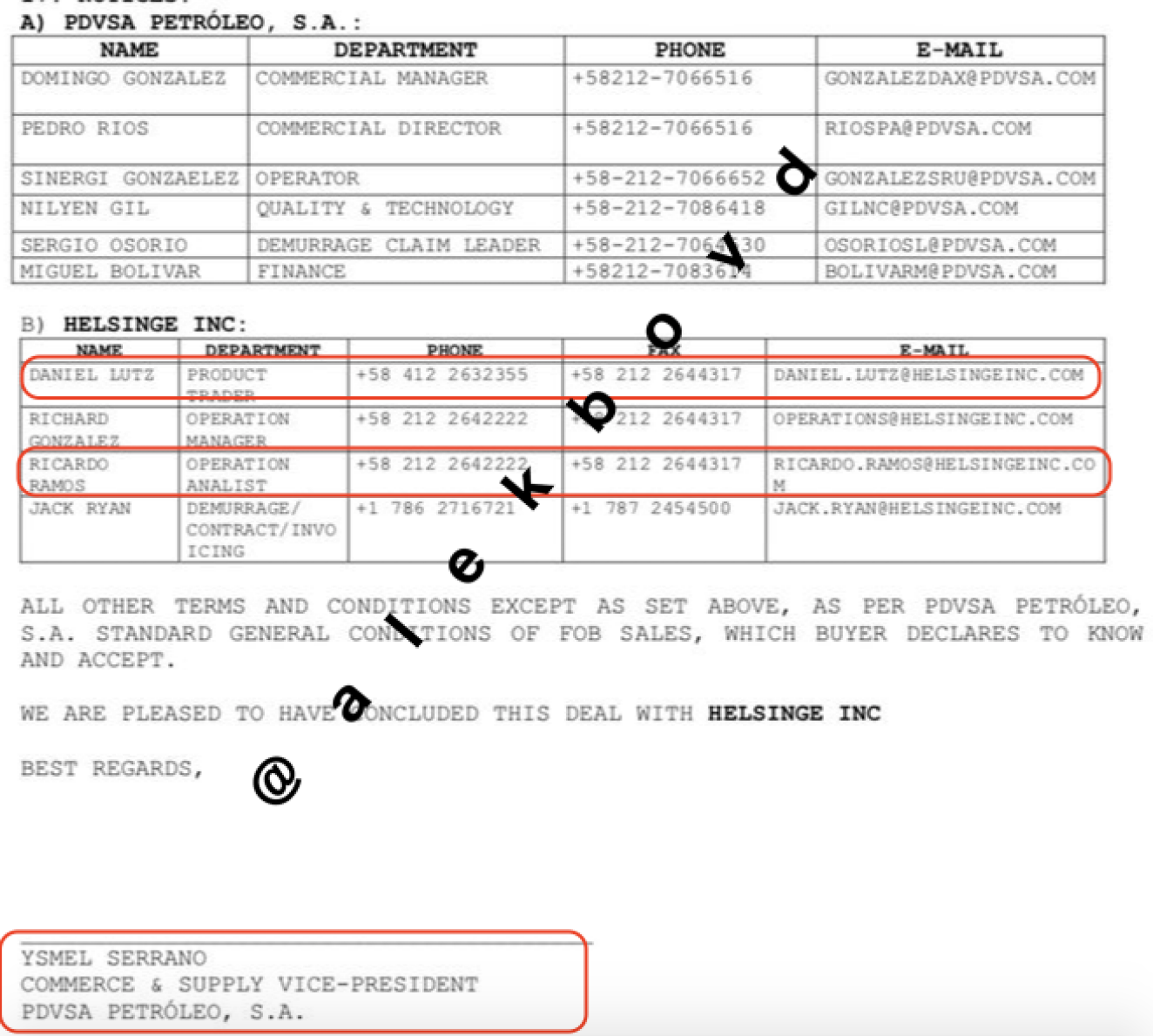 One of the handful was Ricardo Ramos, son of opposition leader Henry Ramos Allup. As recently as end of August 2017, Lutz and Ramos were still doing deals with PDVSA, despite the fact that PDVSA's management (put in place by the master of all corruption Rafael Ramirez) had in July of 2017 "set up" a New York trust, transferred rights to claim, and gifted 66% of likely proceeds to David Boies and co. The civil case brought by thug Boies was, expectedly, laughed out of court.

But Geneva is different. As we have argued in the past, Johan Droz is leading a criminal complaint against Helsinge, and by association, Trafigura, Glencore, Vitol and Lukoil. PDVSA is acting directly, not through an absolutely unnecessary contraption like the Boies trust. Droz, as related by Besson, is sitting on a mountain of evidence some of which has already been shared with the U.S. Department of Justice (DoJ), according to sources.

DoJ is probing Glencore, Trafigura and Vitol elsewhere, in relation to their involvement in LavaJato, and corrupt schemes in Nigeria and DRC. It is quite likely that all other corrupt schemes combined do not amount to what took place through Helsinge and others in Venezuela.

Helsinge's Swiss lawyers excuse its clients' behaviour like all Venezuelan criminals do: charging "consultancy fees" is "usual" in Venezuela. Indeed, Rafael Ramirez would have never allowed $40 billion worth of PDVSA deals without getting his due somewhere. Same applied to managers left in charge after his departure, and others that followed, like Ysmel Serrano.

Helsinge's very innocent executives are in hiding, and refused to present themselves in either the Florida civil procedure or the Geneva criminal probe. That says a lot. However there's danger, in that the lawyer acting for PDVSA in Geneva (Guerric Canonica) was handpicked by Wilmer Ruperti. That means that thug David Boies and his merry band of collaborators are still involved, despite their farcical case having been dismissed in Florida.

There's more. The legal expert hired by Helsinge to argue about the illegality (as per Venezuelan law) of David Boies' trust is Ignacio Hernandez, in turn appointed by interim President Juan Guaidó as new Legal Counsel. There's obviously an unavoidable conflict there, as Hernandez took money to argue the case in Florida for those being sued by PDVSA in Geneva. Put another way, Hernandez patrons stand formaly accused by a Geneva prosecutor of corruption, money laundering and theft of critical PDVSA data.

Sources claim Hernandez's appointment by Guaidó was imposed by Ramos Allup, who gets to pick some of Guaidó's new appointees owing to number of seats his party Acción Democrática controls in the Assembly, and is hell bent in saving his and son's bacon.

Helsinge continues with its idiotic legal defence, saying a probe into the affair ended up with acquittal... in Venezuela, as if kangaroo courts where anyone can buy a favourable ruling is anything to go by. In December last year, a Geneva ruling dismissed Helsinge's arguments as to illegality of claim presented by PDVSA, moving case further to the actual merits. Besson reports that Helsinge is now trying to get Droz dismissed from the case, presumably due to past connections to Guerric Canonica and more recently to Canonica's uncle. This, again, is an idiotic stance, for however much Droz's connections can be brought into question, the merits, i.e. that server that was shipped by husband of Helsinge's accountant to Droz, will still be there in case a new prosecutor is appointed. Any independent prosecutor, anywhere on earth, probing PDVSA's deals will only reach the same conclusion. As Helsinge claims: it is usual when doing business in Venezuela to pay, erm, "consultancy fees".

Rafael Ramirez and the management structure he put in place encompasses nearly all of Morillo's partnership with Swiss traders (2004-2017). PDVSA saw oil sales in excess of $1.3 TRILLION  in that period. Glencore, Trafigura and co did a phenomenal amount of business in that period, and every last deal was done through bribe payments. That's another inescapable truism that'll become evident five minutes into any serious probe on the matter. 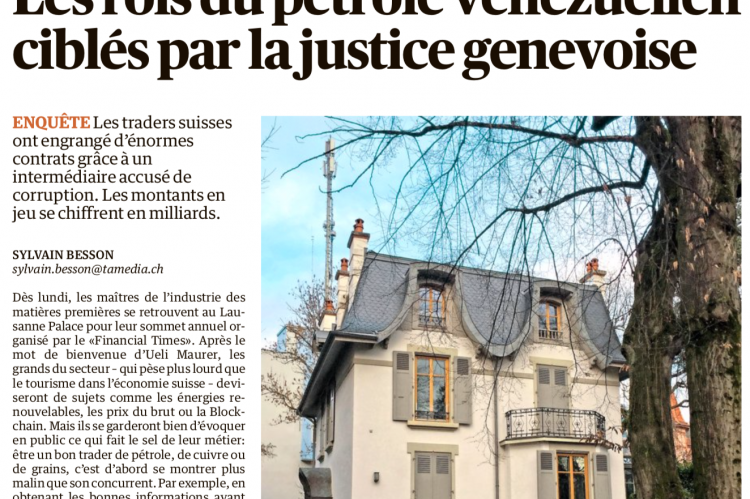