The problem with Venezuela is which of its realities should be prioritised. It is a country "governed" by a group of people who have a fluid stance with a kind of criminality that would make any government subject to rule of law and independence of institutions collapse. Chavismo's relationship with Colombia's narco terrorist groups (FARC, ELN, etc.) is well documented. Hugo Chavez himself was vociferous about his sympathies with the enemies of the Colombian State, and his successor is not different. One resulting reality is that Venezuela has become an operations base for a number of drug cartels. The kind of income that such activities generate, in a country as corrupt as Venezuela, guarantees smooth operations. When factions within Chavismo, for whatever reason, grow impatient or intolerant towards Colombian drug cartels operating in Venezuela, a conflict like the one in Apure ensues.

Underlying drug trafficking there’s galloping, unbridled, State-promoted corruption. Arguably, there isn’t a single anti corruption official within high echelons of chavista power. The violence that the most absolute absence of efficient law enforcement breeds rarely touches these officials personally. They live in very well protected bubbles, totally insulated from the consequences that their fluid stance on criminality produce. Maduro, therefore, has got nothing to fear from drug lords that have been purposefully given ample room to operate. Maduro's favourite proxy is a Colombian "businessman" (Alex Saab) whose partner lives under a fake identity due to a 15-year conviction for drug trafficking. Has that little fact impeded Saab in any way? Can anyone reasonably argue that Maduro is ignorant about Saab's longtime partner's past?

Then, there's the humanitarian crisis reality. Latest report by the International Rescue Committee claims "...deteriorating conditions have led over 5.6 million Venezuelans to leave their country, making it the world’s second-largest external displacement crisis, just after Syria. Inside Venezuela, humanitarian needs continue deepening, with a 26% contraction in the economy during 2020 and 7 million people in need."

We would argue that "deteriorating conditions" are, quite simply, direct and principal consequence of Chavismo's attitude towards corruption. Why? An opportunity for theft of public resources has never gone amiss among chavistas. It matters not whether big or small. At local, regional, national or international levels, whenever there's a chance, it is a certainty Chavismo will find willing partners to loot the State. The raid on public coffers has been of such magnitude that resulting scarcity of most basic staples has caused that nearly 20% of Venezuelans have decided that walking away is a better prospect than staying.

Folks don’t flee because of the momentary conflict in Apure, or because El Coqui's gang is raining bullets on Maduro's praetorian forces in west Caracas' slums. They’re fleeing because they’re hungry, because there's zero prospects of improving their lot, because no jobs have been created in decades, because Venezuela is a failed State. It is a failed State because the ruling elite made it so. Chavez was not forced, by anybody, into alliances that were / are completely detrimental to Venezuelans in general. Nobody imposed the FARC and ELN on Chavez. Nobody hurried him to bend the knee to Fidel Castro and his parasitic dictatorship. Certainly, no American government -which for a good decade and a half dismissed Chavismo as noise- delivered him to Hu Jintao and Vladimir Putin with a note saying "here's a willing servant for your geopolitical games".

Chavismo has squandered over $1.5 trillion dollars since it reached power. Responsibility for such insane dereliction of duties in administration of State resources falls squarely and uniquely on Chavismo's shoulders. While unaccountable control of such wealth has been a defining feature since 1999, it isn’t less accurate to say that many institutions that operate -allegedly- under strict anti money laundering and corruption guidelines in the developed world had tickets to that party. The truism that, for a chavista, a corruption opportunity is never to be missed, applies equally to bankers around the world: there’s isn’t a single dollar from corruption proceeds to be missed.

Then, there's politics, of course. Maduro is the interlocutor, the main man, the one who calls the shots and controls at least parts of the chavista State. Same man who turned a blind eye, for instance, on his own nephews' drug trafficking activities. Ripping a page from the Cuban book, Chavismo maintains that every last problem and lacking in Venezuela is caused by sanctions imposed in the recent past: "it's an embargo!" they cry. Sanctions or not, little transpires about the ever growing dependance on Russia, China, and Turkey, or the never ending energy gifts flowing to Cuba. Somehow, billions gifted to Cuba never made it into Chavismo's "tally of unrealised earnings due to the embargo".

Chavismo is blessed with the best opposition any ruling gang could ever hoped for. Through corruption, it has co-opted every single political foe and party. Having done so, it has everyone’s number. To top it off, Venezuela no longer has a working, independent judiciary, but a nondescript system in place to punish at will political or financial opponents. Redress on any given issue is whatever chavistas decide it is. Effectively chavista subjective rule of law.

To conclude the shortlist, there's PDVSA. Like the opposition case, the best money laundering tool ever to be devised. With international operations, myriads of bank accounts scattered around the world, and drug kingpins at the helm, it is the proverbial eternal wealth fountain. PDVSA laughed off U.S. Treasury sanctions, and can keep afloat and doing business at the current rate, or at a diminished one, forever. Maduro is well acquainted with this fact.

The Maduro that is to receive European electoral observers, and "agree" to electoral conditions that a hopeless U.S. State Department wants to impose, has all the cards. There’s nothing, no imposition, or sanctions, that the Biden administration can force on Maduro that will make him move one way or another. Same applies to the international coalition that once sided with a nulity called Juan Guaido. All they have left is carrots. All that can be tried under current predicament is to appeal to Maduro's "good nature", with promises of fantastic business opportunities and to reestablish diplomatic and political relations, which in turn will consolidate Chavismo forevermore.

It  has been said that political cycles, revolutions, etc., have undetermined timeframes. To reach some kind of entente with such, negotiations ought to necessarily include the ruling clique. When that ruling clique is formed by thugs averse to law and order, justice, democracy, binding agreements and independent tribunals there's little chance of reaching any solution that is not to their complete liking. For it has to be said, no one is considering the alternative, which is to remove Chavismo by force.

That's a reality that most seem to have missed about Venezuela.

The Biden administration, which remains the only party devoting any interest / resources to "help the situation", has not departed from policies formulated and imposed by Donald Trump. It carries on, recognising a fake leader and entertaining the fantasies of deranged opposition politicos devoid of legitimacy. It also has to deal with the prospect of losing the House next year, and getting blowback for what the Democrats did to Trump. In such scenario, Venezuela is behind the last consideration in the pecking order. Maduro knows that too, and he's demonstrated a fine ability to bide his time. 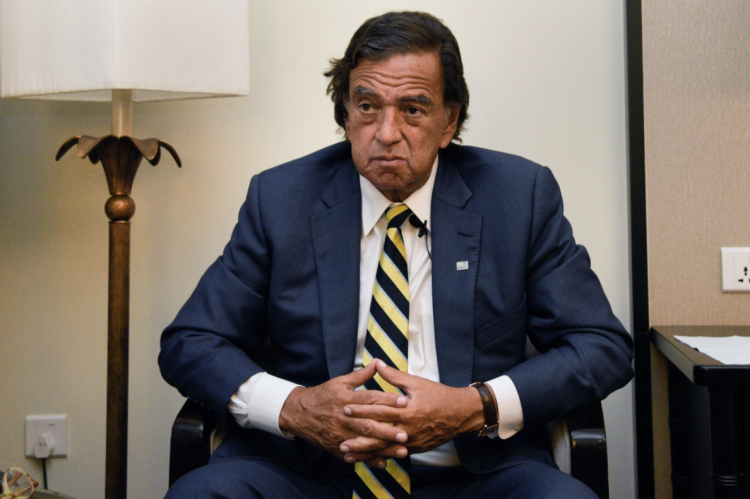 Fight against global corruption: an asymmetric war
May 26, 2022 - 06:51
END_OF_DOCUMENT_TOKEN_TO_BE_REPLACED