Victor Vargas, buyer of Larry Ellison's yacht, "banker" extraordinaire who's been "rich all his life", took another blow to the liver yesterday in Panama. The Superintendent informed about the forced liquidation of PLUS Capital Market Inc., one of the international branches of Grupo Occidental de Descuento, Vargas' money laundering operation. But there is something in the Superintendent ruling that caught my eye: Dinosaur Merchant Bank Ltd.

Paragraph 83 refers to Dinosaur Group and Avila Asset Management as "the most significant" re Ruperti's assets position.

Readers of this site will surely remember the scandal last year about Goldman Sachs paying $865m for $2.8bn worth of "hunger bonds" from Venezuela. The WSJ outed the brokerage firm that negotiated the bonds with Goldman: Dinosaur. I am absolutely sure that Venezuela's Central Bank's chosing of a firm -that happens to manage Ruperti's affairs- to sell bonds to Goldman, for 30 cents on the dollar, is purely coincidental.

How about Avila? There's a firm named exactly like that linked to Victor Gill, an utterly corrupt "banker" whose daughter Maria Graciela is married to Luis Oberto. Oberto's father, in turn, is the O in BBO Financial Services, another firm that has done good business with Ruperti for well over a decade. As per FINRA disclosures, Avila was found to facilitate "the sale of over $2.5 billion in Venezuelan Bonds for customers without having in place adequate money laundering (AML) procedures".

German Rivero Zerpa is described as Ruperti's personal banker and founder of Avila. Rivero Zerpa was barred by FINRA from "association with any FINRA member in any capacity" in late 2014. But Rivero Zerpa has pedigree, his Bloomberg profile claims he has managed a "portfolio of clients worth $3.2 billion, executing fixed income trading of sovereign debt, trading of OTC options on sovereign bonds, as well as structuring and trading of credit link notes." He is a former associate of Juan Domingo Cordero, partner in turn of Raul Gorrin and Gustavo Perdomo. Nowadays he is associated with an outfit called Helvetica in California, and a handfull of UK shells in partnership with Julio Herrera Velutini.

While Rivero Zerpa's activities of late with folk perilously close to Juan Guaido isn't the topic here, I thought it was relevant to bring out Dinosaur relationships with totally corrupt Venezuelan "businessmen" in the context of Victor Vargas' fall from grace. But above all, to highlight its presence in Panamanian financial watchdog's administrative enforcements.

If our reading is correct, Panama's Superintendent wanted to move all cash and assets controlled by BOI Bank (Vargas' laundromat in Antigua), to Dinosaur Merchant Bank Ltd. Now, why oh why, would Panama's financial authorities seek to protect investors assets by requesting, three times, transfer of custody of said assets to Dinosaur? Are Panama's authorities aware of Dinosaur's past in Venezuela?

Apparently it dawned on the Superintendent that Dinosaur was already a custodian to some of BOI Bank's assets, but who recommended Dinosaur?

Vargas has been trying, desperately, to move to Antigua's jurisdiction the mess created by syphoning close to one billion USD from his Curaçao Banco del Orinoco. It is alleged than Antiguan authorities are "friendly" towards Vargas. However, sources report that escaping the clutches of Curaçao and Saint Maartin's Central Bank has completely failed.

Vargas has more pressing issues. First and foremost, Antonio "el catre" Morales, head of Venezuela's Superintendency of Banks. This chavista Cerberus holds all the cards against Vargas, and may very well send him to a very long staycation in El Helicoide, at any given time. Sources have informed this site that part of funds looted in Curaçao belonged to narco generals and other criminal elements of chavismo. Not even a G5 can put enough distance with those thugs, and Vargas knows it.

Then, there are persistent rumours of a sealed indictement against Vargas, whose banking practices of the last two decades encompass nearly all the corrupt players that have looted Venezuela since chavismo got to power. That's what having one of the biggest banking operations in Venezuela brings: lots of opportunities from lots of criminals, and Vargas is a "person of interest" from SEC all the way to FBI and Treasury.

Vargas' employees are dropping him faster than you can say Lechuza. The Spanish Prince son in law is "charming" his way into Vox: the radical Franco-apologists that got the third largest share of the votes in Spain's last elections. Raul Baltar, after a stint with equally corrupt Juan Carlos Escotet, moved from his CEO role in Vargas' Occidental de Descuento group to new pastures at Bamboo Venture Capital. Then, Juan Carlos Medina Carruitero, Vargas' point man in Bancamerica and representative -for the Dominican Republic even though he's Peruvian- for LatAm's Federation of Banks has deleted all associations to Vargas (too late).

Vargas's reckoning with justice beckons. His associates / clients must already be thinking better to silence him before is too late. In light of late "aviation accidents" in Venezuela, where people very close to highest power have died, Vargas must be sh... bricks. 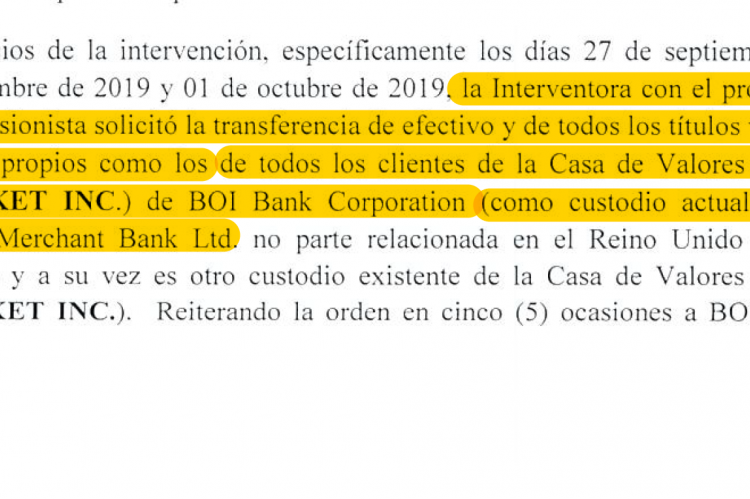