Finally, a major outlet picked up on Burford Capital's other dodgy business, that of its head of "global corporate intelligence, asset tracing and enforcement business" Daniel Hall.

Infodio readers already knew all of that, of course. In May last year this site posted about how Burford's Hall bribed paid, or promised to bribe pay, Andy Longhurst (former Wilmer Ruperti employee) in exchange for Ruperti's financial information. That information Hall would put to good use in a case involving Russia's Novoship and Ruperti that Burford Capital had taken on.

Hall would then use / trade that information in two separate cases: one in which he was involved, and another in which he wasn't. The first was a dispute between Harry Sargeant III and Mohammad Al Saleh. The WSJ even did a report on the case. The second was a dispute between the Sargeants and Wilmer Ruperti. The context of the second is key here, for the Sargeants had been having multiple legal fights among themselves elsewhere, which ended with extrication of Harry Sargeant III from the family's asphalt and energy business.

There was bad blood between brothers. And so Daniel Sargeant, involved in dispute with Ruperti in relation to settlement of shipping contracts with PDVSA, saw fit to deliver pornographic material related to Harry Sargeant III to Hall, in exchange for Ruperti's financial information. Hall obtained Ruperti's info by bribing hiring Longhurst, or in the course of Novoship case against Ruperti.

The premise of Chinese Walls is unknown to the lawyerly bunch at Burford, as much as the premise of never paying for information obtained by illegal means. For Longhurst had no more right to be selling his employer's financial information than Daniel Sargeant distributing sex tapes of his brother. Yet none of that bothered Hall.

It didn't bother Aviva Will either. Will, "Senior Managing Director with responsibility for Burford’s underwriting and investment activities", didn't find questionable, inappropriate, or unlawful Hall's sharing of Sargeant III sex tapes with her, via personal email... They even joked about it, referencing bananas, and Nazi uniforms, and the type of alcoholic drink that should be had to watch private videos between consenting adults. Mind you, these are the new gen, £4bn über sleuths, leaving cyber trails of self incriminating evidence a mile wide.

Hall's team at Burford's "global corporate intelligence, asset tracing and enforcement business" did not see a reason to report distribution of such material. Burford's corporate culture seems as ethical and righteous as that of Alan Dershowitz and his buddy Jeffrey Epstein, two other admired titans that could do no wrong once upon a time.

The key issue here is: how did Burford's shareholders benefit from Hall's reckless behaviour? Chasing thugs and their assets is something we understand very well in this site: we've been doing it for way longer than Burford. So how could a bunch of supposedly well educated and sophisticated lawyers ignore the consequences Hall's antics could potentially bring in?

Court records, on both sides of the pond, paint a grim picture of Hall, in particular, and of Burford. Trying desperately to avoid further embarassment, or preventing further lawsuits, a lot of the -presumably- juicy stuff has been filed under seal. However I could catch in a deposition a reference to an email, sent by Roberto Finocchi (Daniel Sargeant's employee), to "expedite" payment of some $929,000 to Candido Vaccarezza. I'm sure Sergio Moro would love to hear more about that, though that's a story for another day.

Muddy Waters is only half right about Burford Capital. Cooking the books is something almost every major company does nowadays. Its systemic. But when fiddling with accounts to dupe investors, appointing wife as CFO and cashing in shares is coupled with paying bribes, trading stolen information, and distributing -for no apparent gain- pornographic material, then one can only describe such a business as a criminal gang. 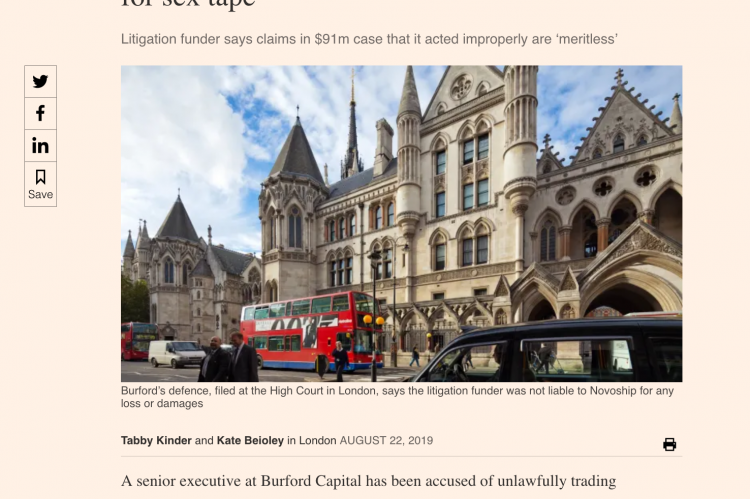