[See added note below] - From GOV.UK: "Foreign Secretary Dominic Raab has announced further sanctions on individuals under the UK’s Global Anti-Corruption sanctions regime." Further on the press release: "Alex Nain Saab Morán and Alvaro Enrique Pulido Vargas for exploiting two of Venezuela’s public programmes which were set up to supply poor Venezuelans with affordable foodstuffs and housing. They benefitted from improperly awarded contracts, where promised goods were delivered at highly inflated prices. Their actions caused further suffering to already poverty stricken Venezuelans, for their own private enrichment." Alas the UK's Global Anti-Corruption sanctions regime only got half the measure right.

For the avoidance of doubts: both Saab and Rubio Salas are Colombian citizens by birth, and Venezuelan citizens through chavista corruption.

The reason Rubio Salas had to adopt a new identity was a 15-year sentence in absentia, from a court in Milan (April 1997), for heading Cartel de Bogotá and trafficking two tonnes of cocaine and 17 kgs of heroine to Italy. Italy formally requested Colombia to extradite Rubio Salas, to face charges, which unfortunately never happened.

But Rubio Salas would reinvent himself as Alvaro Enrique Pulido Vargas, who like Saab, also got Venezuelan citizenship even with his fake identity. When Saab received from chavismo the seminal $685 million worth of housing contracts (without competitive bidding), the UBO of the whole structure was Rubio Salas, through a little Malta-registered shell (FGDC MALTA HOLDINGS LIMITED), which this site was the first to reveal in October 2013.

From then on, Saab and Rubio Salas (aka Cuchi) have been inseparable. They've done billions worth of corrupt business with Nicolas Maduro. They’re invested in practically every relevant-to-chavismo's-survival sector: from gold smuggling to oil trading.

This site once heard from a senior Foreign, Commonwealth & Development official that the UK's regime of sanctions differed substantially from that of U.S. Treasury, in that in the UK's case, an individual could only be sanctioned if a sufficiently robust legal case that could stand test of trial in court could be made. That is, breach of existing UK legislation (Bribery Act 2010 in this case) had to be demonstrated before a sanction could be imposed.

Given the lack of interest that the UK has traditionally shown to put a stop to rampant corruption within its own jurisdiction, it is surprising that it would include Saab in the UK's sanctions list. Apart from social media services paid somewhere to UCL lecturer Dr Naji Makarem, this site is not aware of any Saab's exposure to UK jurisdictional laws. It is a certainty that no UK authority will be asking Dr Makarem anytime soon just how and where he got paid by Saab to run a propaganda operation with Nigerian "influencers".

And it is all the more remarkable for despite slight international scope of Bribery Act 2010, this site doubts Saab meets the relevant "...person has a close connection with the United Kingdom" test. That test applies fully to Alejandro Betancourt, another mega corrupt thug from Venezuela, who maintains a residence in 4 Cowley Street, right in the heart of Westminster. Betancourt, however, spends quite a lot of his time in London, issues threats from London, operates in London with absolute impunity, yet he is completely unencumbered by UK authorities.

Equally shocking, given amount of work done over the years by this site and others on Alex Saab, that alleged robust legal criteria to impose sanctions would miss the fact that Saab's partner's real name is German Enrique Rubio Salas, which makes Raab's announcement only half right: a legally non existing identity can not be sanctioned.

Added later: German Enrique Rubio Salas is indeed included -as an alias- in the CONSOLIDATED LIST OF FINANCIAL SANCTIONS TARGETS IN THE UK. It seems his name was only  missed from Raab's press release. 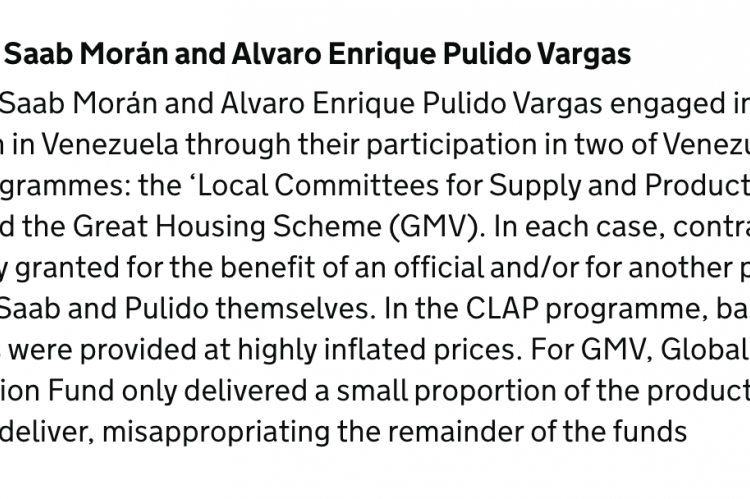