What a spectacle, ladies and gentlemen, this promises to be. Right after popular wake to the news of Alejandro Betancourt funding Juan Guaido and using Guaido's father to provide bona fides to Rudy Giuliani, we had Jorge Rodriguez, the most corrupt political operator of chavismo in one corner, and Rafael Ramirez, the most corrupt financial operator of chavismo in the other, meeting in a virtual ring yesterday, to throw punches about Betancourt, Venezuela's most corrupt bolichico. It doesn't get much better than this, so let's cheer them up, giv'em space, let no man interfere! 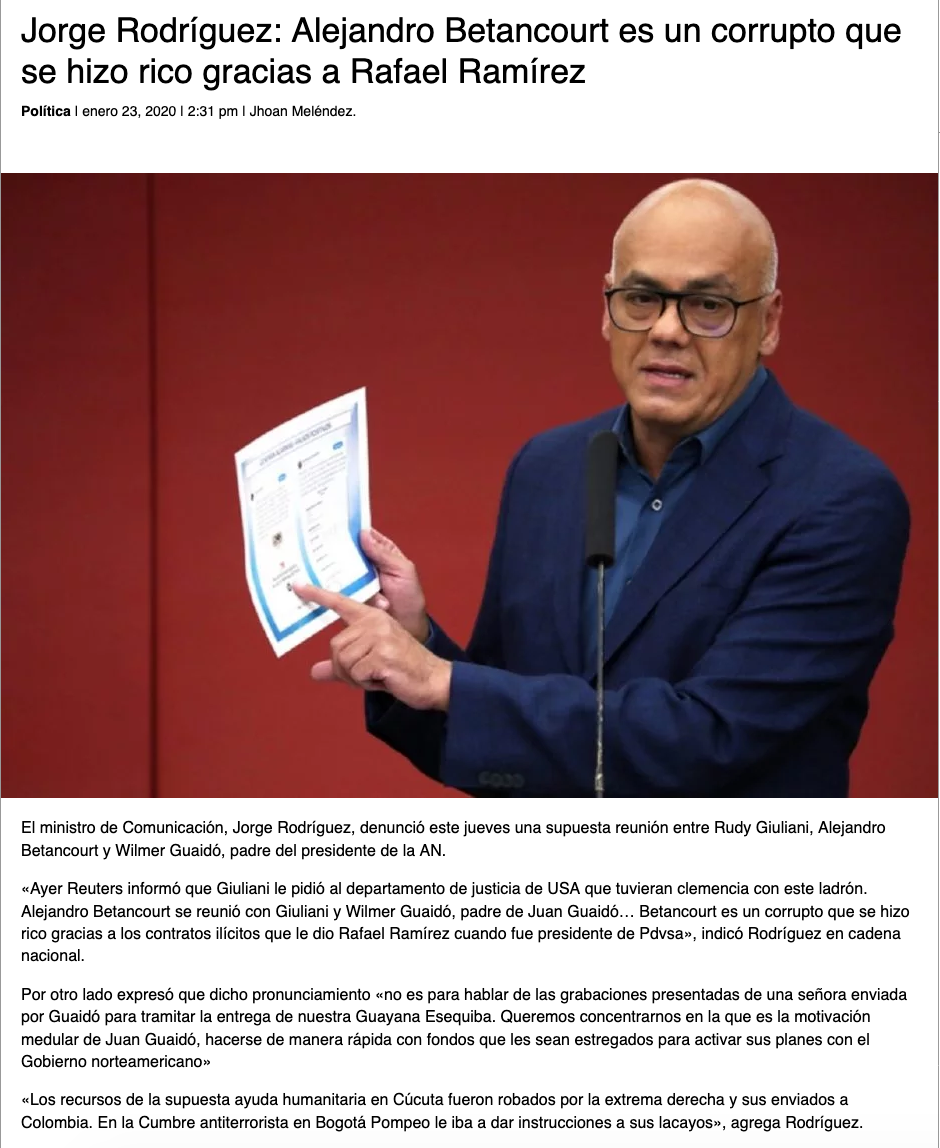 So when Jorge Rodriguez said "Alejandro Betancourt is corrupt and became wealthy thanks to Rafael Ramirez", we had to rush to the kitchen and stick popcorn in the microwave.

Rodriguez is, after all, the master manipulator, the evil shrink poisoned and indoctrinated since childhood by his deranged mum. Rodriguez is also the architect of all "electoral victories" chavismo has had since 2004, and the boss of Jose Luis Rodriguez Zapatero.

Rafael Ramirez, now that he is "collaborating" with U.S. law enforcement and Justice Dept, had to reply. In a series of tweets, Ramirez accused Rodriguez of cynicism, adding that his proxy Majed Khalil became a millionaire thanks to power procurement contracts, and went on to point that Alejandro Betancourt is chavismo's partner in Petrozamora and Petrosur, two joint ventures with PDVSA.

Ramirez actually posted that on Twitter, I'm not joking! He said he had proof...

And he followed, with another tweet saying Rodriguez and Maduro got 40 million for 2012's electoral race from Brazil (Odebrecht), which they stole, adding "I got proof".

And then, final in rapid three-punch combination, Ramirez called Rodriguez "miserable", for he knows Alejandro Betancourt is a proxy of Nicolas Maduro, who is currently under criminal investigation in Florida as part of a $1.2 billion stolen from PDVSA in December 2014, and is partner with Russians. Ramirez concludes about Betancourt with: "Surprise! He works for Maduro and Guaido".

Oh, what derangement! It must be life in Rome, away from any action, as a total nobody, giving interviews here and there and having to put up with Beatrice while running a little farm, what's making Venezuela's once all-powerful oil tsar lose his marbles.

Ramirez forgot, of course, that he was the one who welcomed, approved, signed and established Petrozamora, the joint venture between PDVSA, the Russians (Gazprombank) and Alejandro Betancourt.

Ramirez also forgot that, under his watch, PDVSA gave Betancourt a handful of procurement contracts, back in the days when Rodriguez's proxy Majed Khalil was on his way to becoming a millionaire. In fact, what Betancourt did, with Ramirez's assistance and approval, was elbow Khalil and supplant him in power generation contracts that relied on the SAME PDVSA subcontractor: Missouri-based ProEnergy Services. 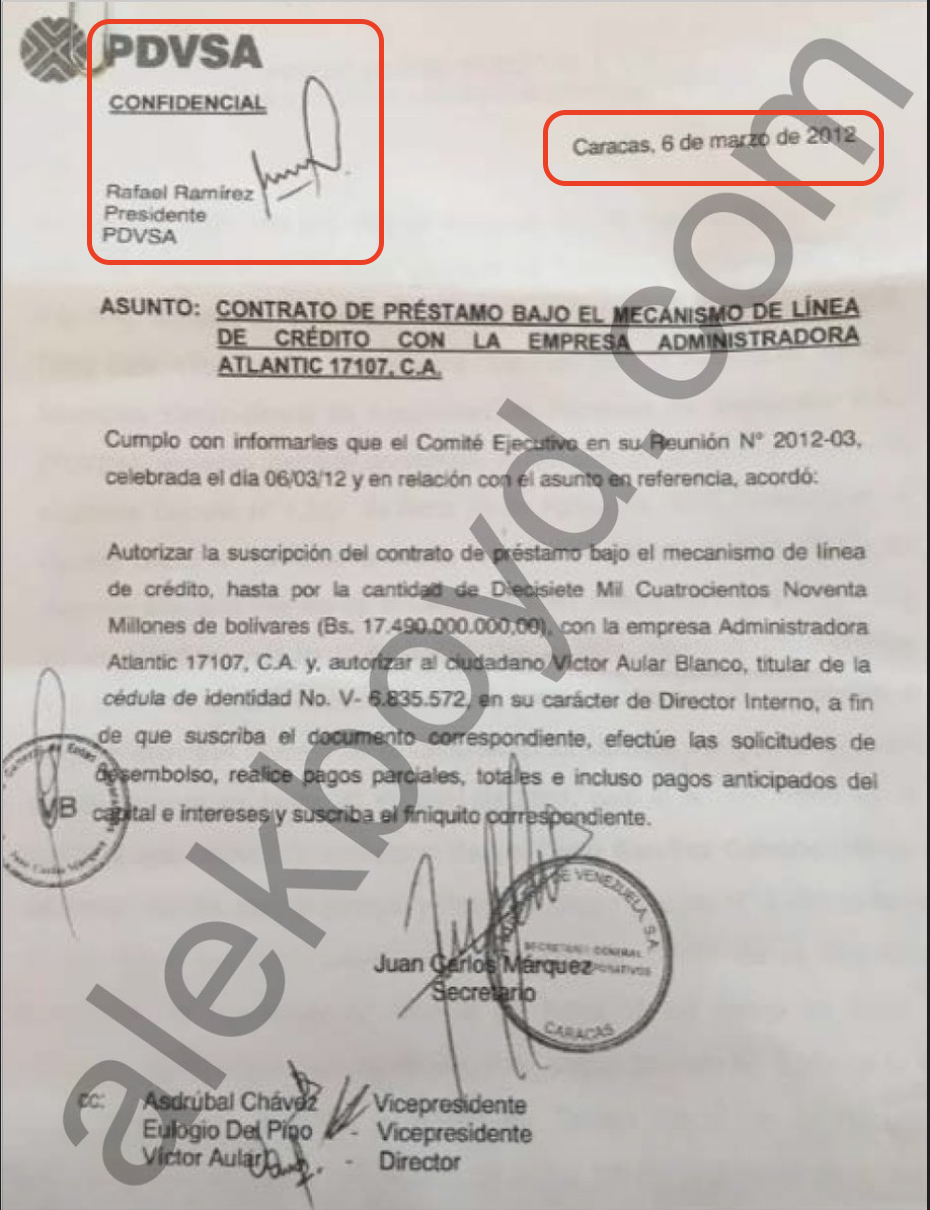 Nervis Villalobos, one of Ramirez's most trusted lieutenants now pending extradition to the U.S., was hired by Betancourt / Derwick to drum up business with PDVSA, which he did. Not only power generation procurement, mind you, but money laundering on an unprecedented scale. Villalobos, however, is part of Ramirez's amnesia.

His signature is right there in the document. Ramirez saw no problem, allowing PDVSA funds deposited in Portugal's Banco Espirito Santo to be stolen by his partners. $4.5 billion in total. I encourage readers to visit this link (https://infodio.com/es) and read the series "La corrupción de Rafael Ramirez en PDVSA".

As per Ramirez accusation regarding funds gotten from Brazil (Odebrecht), please check this here, where his direct participation, and requests to Nicolas Maduro to obtain funds from that source, are clearly laid out.

I won't even mention how Ramirez sent his uncle Egly Ramirez to do completely corrupt deals, WITH Odebrecht.

Only three days ago we were further exposing Ramirez's lies. It beggars belief that he feels he has moral capital left to be accusing anybody of corruption. Though the fantastic thing here is that both Rodriguez and Ramirez agree on something the whole world but Rudy Giliuani now knows: Alejandro Betancourt is a totally corrupt thug.

Now, we've been saying that since 2012. We have the best and largest archive of evidence proving Betancourt's corruption. But Betancourt could not have become a "magnate" without Ramirez. Creation of Petrozamora could not have happened without Ramirez, for remember: he was not only PDVSA CEO, but Minister of Energy and Petroleum at the same time! Had Ramirez blocked Betancourt when Villalobos first came knocking, we probably wouldn't have heard of him at all. Ramirez MADE Betancourt.

Ramirez must've forgotten about the Neri Bonilla brothers too. He must've forgotten the deals that his brother in law, Baldo Sanso, did with them, the parties, the trips, their pairing as "PDVSA counsel" without official title, counsel for Corporación Venezolana de Petroléo (CVP)... But more importantly, Ramirez doesn't seem to recall the loving relationship the Rodriguez siblings have with the Neri Bonillas. So he's not only throwing Betancourt under the bus here, but exposing himself and partners of his brother in law too!

Utter derangement. That's what this Twitter bitch-fight is. Rodriguez claiming that Betancourt is a corrupt thug, when DoJ-wanted Betancourt-partner Francisco Convit lives completely undisturbed by chavista justice in Caracas, gives all the credence needed to the mud slinging match. Add to that Raul Gorrin's excellent rapport and relations with Maduro, read with Rodriguez, and any corruption accusation coming from that corner is nothing but vapid BS.

A word of caution to U.S. authorities relying on Ramirez as a whistleblower / source: be very careful. 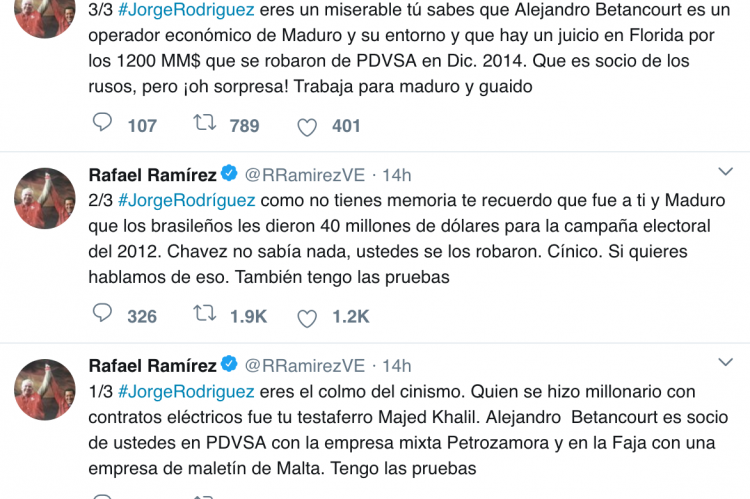