Question to Department of Justice re Venezuela

"In 2013, an FBI money laundering investigation was initiated, based on information provided by the Andorran government, into the following individuals:

This investigation was closed in 2015 due to declination of prosecution by the US Department of Justice."

Then, there's another letter, ref. DOJ: CRM- 182-46561, dated September 18, 2017, addressed to Patricia Quillacq in Andorra, with the subject matter "Request from the Principality of Andorra in the Matter of Diego Salazar Carreño", and signed by Erin E. Mikita on behalf of Vaughn A. Ary.

The letter follows up on previously mentioned, thanks Andorra's assistance in criminal justice matters, and concludes that, on the issue of obtaining information related to criminal probes conducted in the U.S. on a number of individuals and companies related to the money laundering scheme executed by Salazar, Villalobos, Alvarado et al at Banca Privada d'Andorra, neither DOJ nor the FBI have any information / are aware of criminal probes related to UNOVALORES, Luis and Ignacio Oberto, and Luis Carlos de Leon Perez.

A criminal probe into Villalobos, Alvarado, de Leon had been ongoing, for years, as both were associated to case of Roberto Rincon, as per DoJ own records that state "This case was filed on December 10, 2015 in the Southern District of Texas."

Then in Florida, a $1.2 billion money laundering case known as Money Flight had been brewing since 2016. In fact, in the criminal complaing the following can be read:

"In 2016, a Confidential Source (CS) approached the HSI Miami Office (HSIMiami) regarding 78 million in Euros the CS received, which originated from a loan contract with PDVSA. The CS was involved in a money laundering conspiracy and wanted to surrender the money and cooperate. HSI-Miami thereafter began an undercover investigation: Organized Crime and Drug Enforcement Task Force (OCDETF) Operation Money Flight."

Carmelo Urdaneta Aqui, one of the indicted in Money Flight, was also active, along with Villalobos, in the money laundering scheme centered at Banca Privada d'Andorra.

How the fuck could DoJ and the FBI say, in August and September 2017, that they had no further information pertaining criminal investigations involving Villalobos, Alvarado, and the Obertos? Declination of prosecution?

And then some people wonder how Venezuelan thugs are walking around freely, though with law enforcement of this sort, no criminal needs worrying. 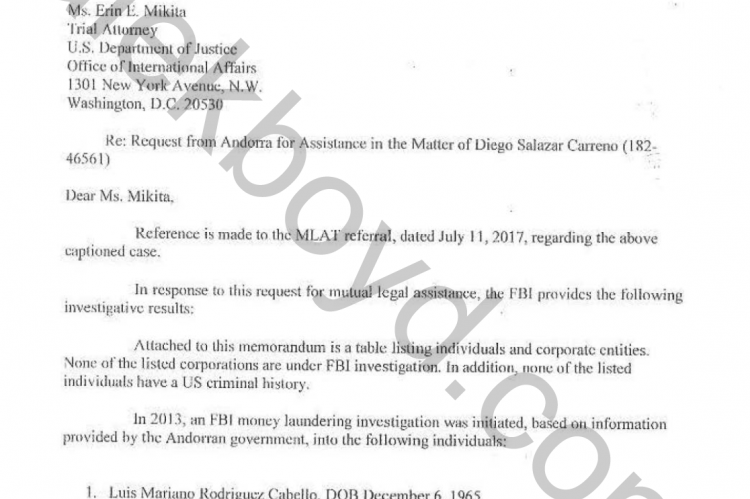