UPDATED 1/12/2021 - 14:20 GMT | UPDATED 2/12/2021 - 12:46 GMT - Further to the little incident last week in Madrid's airport, when Derwick Associates' main thug Alejandro Betancourt was confronted by a fellow Venezuelan and reminded that his future was like that of Alex Saab, we thought it'd be wise to revisit Betancourt's late activities. A hired hand is presenting him these days as some sort of tropical Steve Jobs with a "similar" Midas touch. Betancourt's PR people have all but eliminated Derwick from the man's past. That chapter is referred to as "... in 2007, engineering and building thermonuclear plants in his home country of Venezuela..." This is very odd, considering that every last dime he has today originates from Derwick's ~$1 billion overcharge in power contracts about a decade ago.

Betancourt 2.0 would like to be known as the man who "transformed" Hawkers, a little sunglass online retailer in Spain where he ploughed some €80 million (all of it corruption proceeds). Thermonuclear PR crap shows a smiling Betancourt -not because of Hawkers' profits for sure- in a nondescript room, talking on the phone.

This site has identified the room where Betancourt is meant to be working. It is the billiard room of 4 Cowley Street, a Grade II listed mansion house (price tag $46 million) located in London, right behind Westminster Abbey and a stone throw away from the Big Ben and Houses of Parliament. Betancourt does like that billiard room: here's another take.

UPDATED 1/12/2021 - 14:20 GMT: Jack may have moved on, but censorship on Twitter continues unabated. About 48 hours after geolocating Betancourt's favourite corner in his palatial London residence, located in 4 Cowley Street (SW1P 3NB), Twitter blocked my @infodi0 account for "posting private media".

Twitter is, obviously, being played by Betancourt. First of all, the media used is not private, but Betancourt's very own PR crap, which has been posted all over the place (see below, Google if in doubt). Second, the pictures from the extensive renovation of Mansion House in 4 Cowley Street, are, *also*, in the public domain (source Daily Mail).

Third, using pictures that are already public is not a violation of privacy. Anne Applebaum is right: the thugs are winning, with the ever so efficient assistance of social media companies like Twitter. Betancourt remains co-conspirator no 2 in a $1.2 billion money laundering case, a key figure in a separate $4.25 billion money laundering scheme, a partner of Russia's FSB... just the right resident among Westminster flunkies. 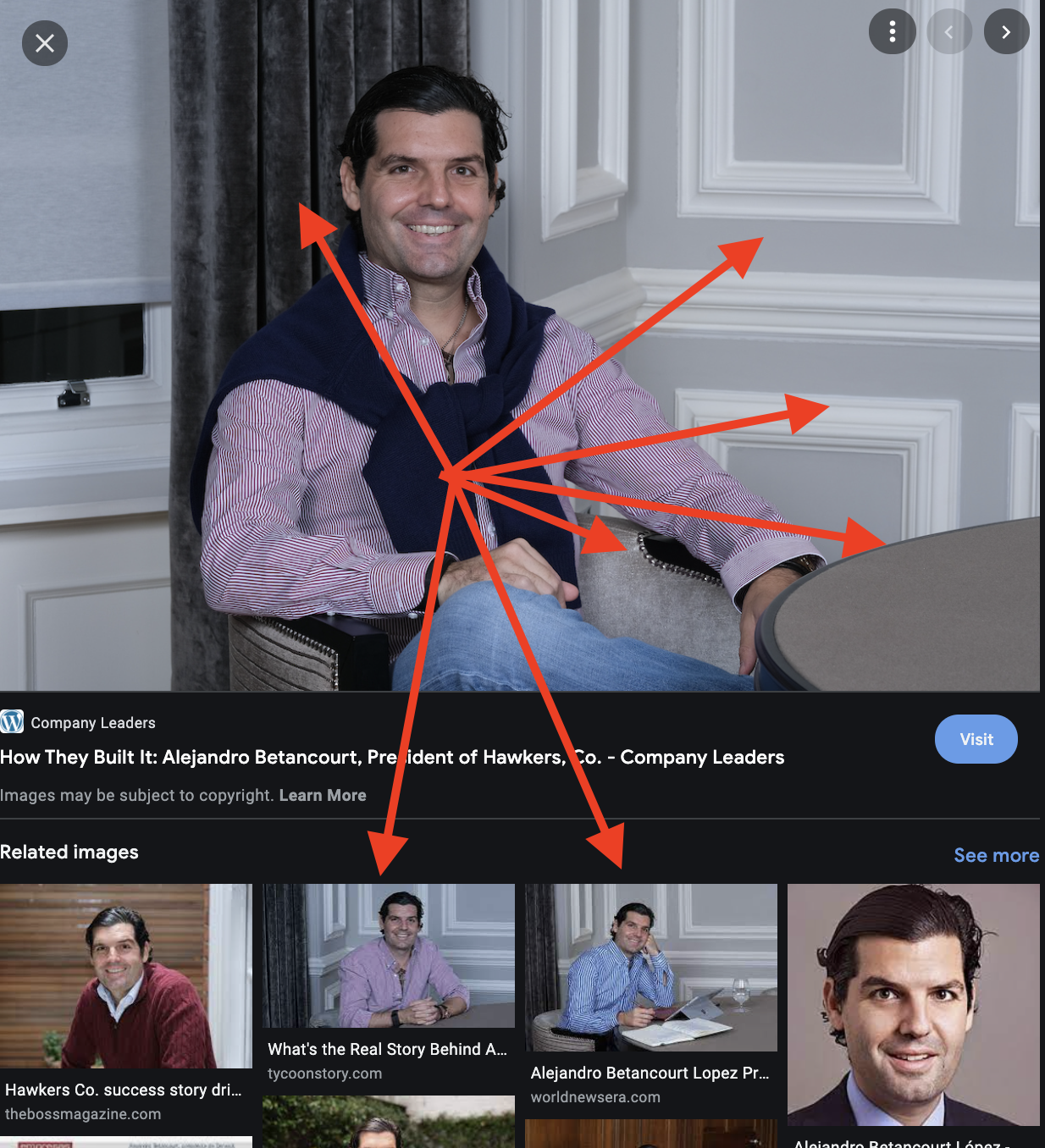 When similar information, about similar thugs, is shared on Twitter by established journalists / media outlets, nothing happens. Exhibit Reuters - Oleg Deripaska below.

But when information about rampant corruption related to Venezuelans is brought to attention, the censorbots get to work. We have lost count on number of times Twitter has blocked this site's account. The previous one used, which was a verified account (@alekboyd) with nearly 50,000 followers, was summarily shut down without much ado, and without observing Twitter's very own procedures. 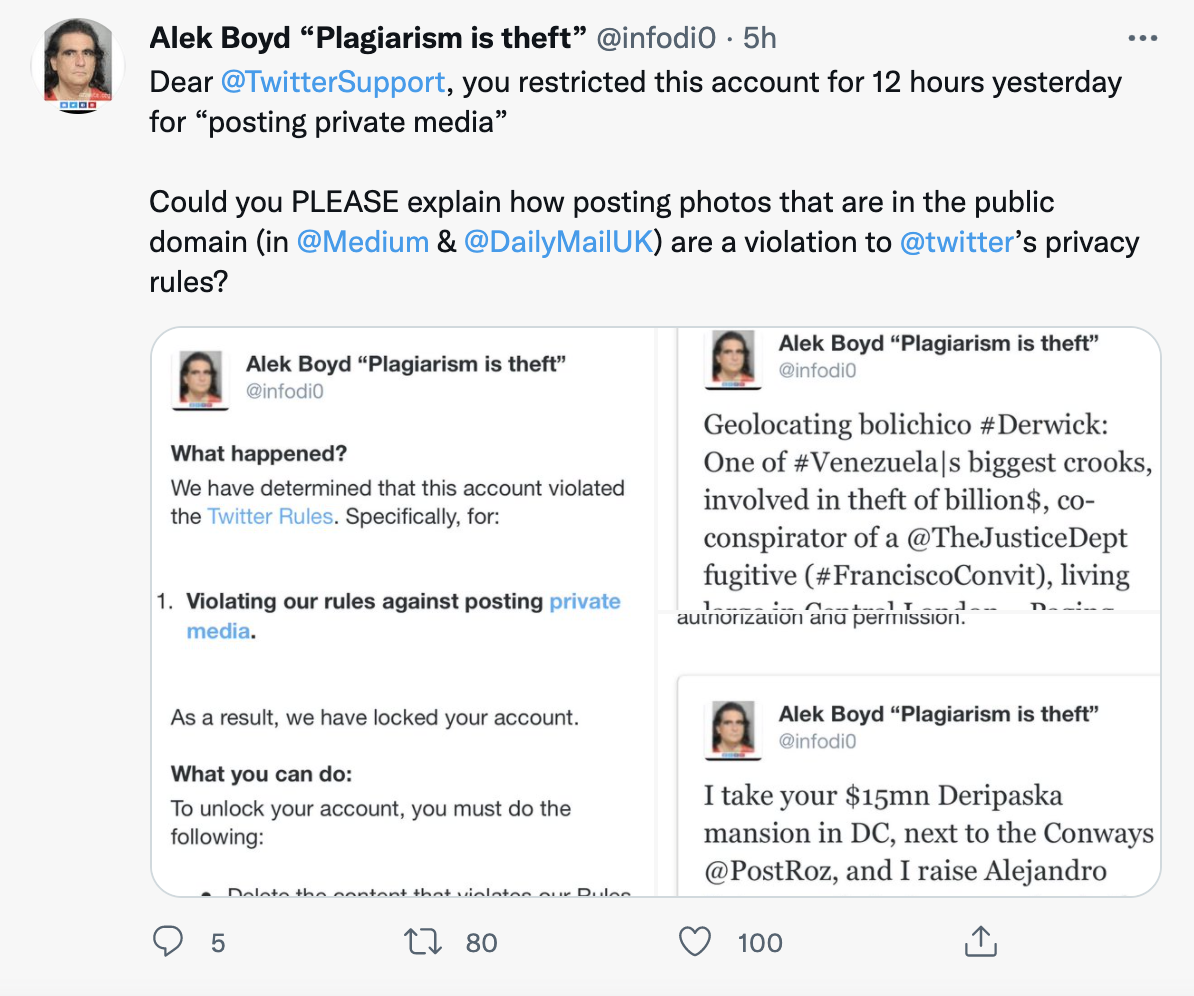 Shortly after that tweet, my @infodi0 account was locked again, this time due to another tweet whereby the corruption of wanted criminal Javier Alvarado Ochoa is exposed. I am appealing deletion of tweet, let's see what -if anything- Twitter has to say.

Alvarado Ochoa is the former head of BARIVEN and CORPOELEC, and crucially, the chavista official who first gave a bunch of contracts to Derwick Associates.

Alvarado Ochoa is meant to be collaborating with Spanish authorities, who first gave him citizenship, then arrested him, then refused to extradite him to the U.S., where he remains wanted in connection to Roberto Rincon's & Abraham Shiera's (both found guilty) bribery payment schemes. In reality, he's brazenly lying about his involvement and innocence.

Alvarado Ochoa is also wanted in Andorra, where millions of dollars worth of bribes he obtained while heading CORPOELEC were laundered through Banca Privada d'Andorra (BPA).

This site has a pile of evidence from Andorra's criminal investigation into Alvarado's activities. Browsing through it the other day, we found transfers for about $1 million to Stambul LLC, a Florida shell controlled by Betancourt's political family. Stambul "is one of those Florida-based businesses owned and run by Venezuelans that, all of a sudden, have hundreds of millions of dollars to invest and develop real estate." The money originated from account AD93 0006 0008 2012 0030 7578 in BPA belonging to LAIRHOLT FINANCE LIMITED, one of the many shells Alvarado used to launder bribes. 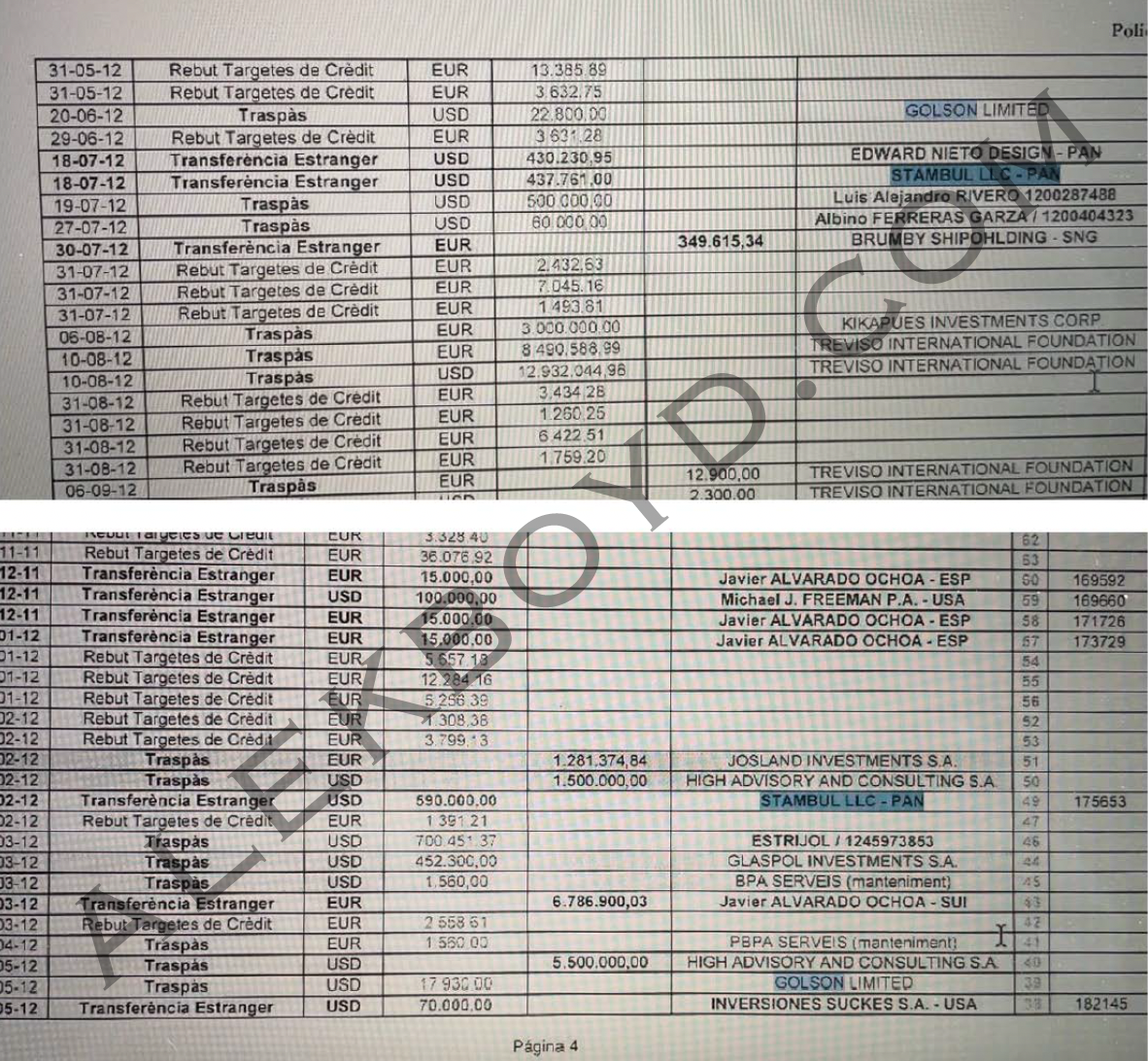