The recent revelation that a Swiss watchdog had frozen $900 million in cash belonging to an Angolan "businessman" caused surprise in some quarters. Evidently, those surprised must have forgotten already the FIFA scandal. They must have missed also news about Michael Lauber. For those who haven't been following, that'd be Switzerland's Attorney General, basically in bed with the FIFA thugs he was meant to be investigating. We then have Swiss banks, historically the pride and joy and a considerable chunk of Switzerland's economy. But when stuff about Swiss banks becomes interesting, to this site at least, its their role as one of the world's foremost money laundering destinations. Swiss bankers are gluttons for offshore money, regardless of origin. No central bank, however remote and insignificant, has issued the first currency that Swiss bankers wouldn't take and launder. It is said that Switzerland's financial system holds about a quarter of the world's offshore wealth, most of which being black money.

When it comes to the preferred topic of this site, Venezuelan corruption, it is a certainty that Swiss banks are going to be involved. Time and again, whether it is the Obertos laundering $4.5 billion, Francisco Convit laundering $1.2 billion, Raul Gorrin and Alejandro Andrade laundering billions from Venezuela's Treasury, Danilo Diazgranados, Armando Capriles, Juan Carlos Escotet or Victor Vargas stashing their loot, Carlos Gill paying a bribe to hubbie of Hugo Chavez's former nurse-turned-Treasury-head, or Alejandro Betancourt setting a Swiss bank to hide his "wealth", we see how Swiss banks are always the first port of call.

Alas, as I was telling a colleague in Switzerland not long ago, banks are only half the problem. The other half is Swiss energy trading houses. Glencore, Trafigura, Lukoil, Vitol... i.e. the cottage industry that emerged from Mark Rich's ashes, from his dolphins Claude Dauphin and Ivan Glasenberg, catapulted to the four corners of the developing world by thugs like Ian Taylor or Gennady Timchenko, this new breed of "businessmen" banked on the already utterly corrupt Swiss banking establishment to, basically, corner the world's energy trading market with an infallible formula: out corrupt the competition.

When the business model is corruption the problem becomes systemic. Swiss bankers are incapable of rejecting black money, because they know for a fact that the bank next door will onboard whoever comes knocking. It's a race to the bottom. Similarly, energy traders see hopelessly corrupt, resource rich nations as easy pickings, where greed can be unleashed.

Case in point PDVSA, twice in the Swiss news today in relation to money laundering and to Lionel Aeschlimann, the head of Mirabaud caught lying about his Venezuelan clients.

When Francisco Morillo, Leonardo Baquero, and Daniel Lutz set up a real time connection to PDVSA's commercial tenders' servers, they didn't come to London nor did they go to New York, to pitch their business. No. They went straight to the Trafiguras, to the Glencores, cause they knew they would be welcomed with open arms, despite the fact that every last transaction done with / through them was illegal. Swiss energy traders saw kindred spirits in Morillo et al, so amiable in fact that they did over $40 billion worth of business together.

That's not an insignificant sum, and one that should have raised alarms in compliance departments up and down Mittelland. Quite the contrary happened in fact, and Helsinge (Morillo's three-man operation) established an office in Geneva, and traded for over a decade, till a faction of chavismo thought to bring the whole thing to an end. Still, despite having been included in a criminal lawsuit involving Helsinge, Swiss traders kept doing business with PDVSA, that's how brazen their operation is. Patrick Feuz and Boris Collardi were only too keen to carry on providing services to Helsinge.

When it comes to banking, Compagnie Bancaire Helvetique's takes the cake with its latest hiree: Sabine Kilgus, a former FINMA board member. This site is certain Kilgus won't find anything untoward about Joseph Benhamou's Venezuelan adventures with Charles Henry de Beaumont, Danilo Diazgranados and many other Venezuelan clients, nor will she report to her former FINMA colleagues what Benhamou is doing nowadays with Russians. When law enforcement is in bed with, or employed by, those it is meant to keep at bay, corruption has come full circle.

Swiss banks are in the thick of many international corruption probes these days: FIFA, 1MDB, Congo, tax evasion, Odebrecht, Dan Gertler, Isabel dos Santos... All of that, put together, does not come even close to the coupling of money laundering and corruption that has gone on between Swiss banks / Swiss energy trading houses and PDVSA. 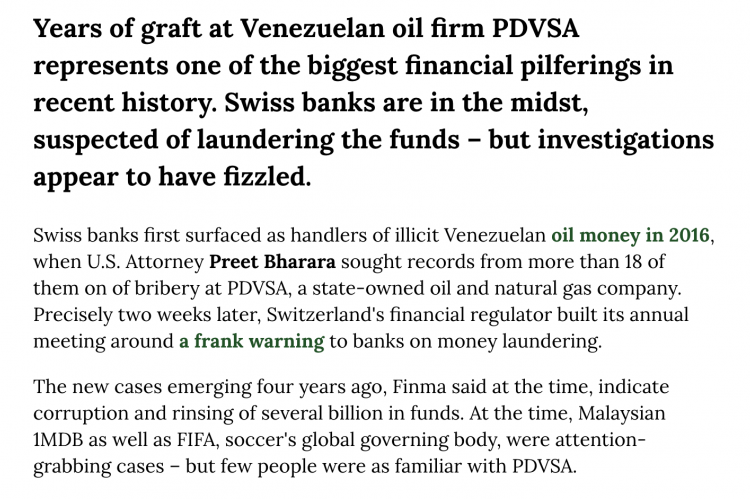