We have been meaning to dive into #OpenLux, Le Monde's data scrapping exercise at Luxembourg's registry of companies. This site has been keeping track of activities in that principality for a while. In 2016 we exposed Derwick Associates's "diversification" (read money laundering) into Luxembourg's jurisdiction. Yesterday, the Miami Herald and OCCRP reported on #OpenLux findings, however both outlets contain inaccurate information. Some fact checking is in order.

Would like to add that new #Derwick’s shells uncovered in #OpenLux by @lemondefr aren’t the first.

We reported about BDK Financial Group in 2016:https://t.co/EWvePC90hO

OCCRP lifted most of the information, without correct attribution, from investigations published by us. The Miami Herald, for the first time on this topic, recognised that this site broke the story about Derwick's association with Russians in Gazprombank Latin America Ventures B.V.:

"During this same period, Betancourt and Convit established Derwick Oil & Gas Corp. in Barbados in 2011. Derwick entered into a highly profitable joint venture with the Russian state-owned Gazprombank, which was awarded the right to explore an oil field known as Petrozamora, one of the jewels of Venezuelan industry. The Derwick partners’ roles in the venture remained secret, but they were eventually revealed by an investigative blog, Infodio."

Convit and Betancourt are the principals of Derwick Associates, a shell that was granted 12 contracts right after Venezuela's power emergency in 2009. Derwick subcontracted all the work to Missouri-based ProEnergy Services. Derwick charged, in total, ~$2.3 billion. This amount comes from a leak (facilitated by this site) of internal ProEnergy documents that were analysed by energy expert Jose Aguilar. While ProEnergy invoiced Derwick about $1.3 billion, Derwick added about another billion to invoices presented to Venezuela. Even Derwick's invoicing was done in-house by ProEnergy. Ergo, claims from Transparency International Venezuela chapter, quoted by both OCCRP and the Miami Herald, that Derwick overcharged $2.9 billion to Venezuela are incorrect.

This site broke the story about Betancourt being conspirator number 2 in Operation Money Flight in October 2018, a $1.2 billion money laundering scheme centered in PDVSA.

This site has published the entire chain of documentary evidence of Betancourt's and Convit's direct involvement in an identical, though previous, scheme whereby $4+ billion were syphoned from PDVSA.

This site broke the story about Betancourt's and Convit's shareholding in Switzerland's Banca Credinvest, subsequently exposed by the Swiss regulator.

This site broke the story about Betancourt's residence in 4 Cowley Street in London, two minute walk from Westminster Abbey and the Houses of Parliament.

This site broke the story about Betancourt and Convit's involvement with Nynas, and their relations with a former Deputy Head of Russia's FSB, something no other media has dared expanding on. We also broke the story on Rudi Giuliani's visit to Betancourt's castle in Spain ad subsequent lobbying work. We exposed Juan Guaido's father and brother connections to Betancourt.

Allegations posted by the Miami Herald and OCCRP related to prosecutors that haven't been able to establish a link between Convit's money laundering and Betancourt are absolutely ludicrous. This site has provided prosecutors in Spain, Switzerland and the U.S. incontrovertible and actionable evidence against Betancourt, Convit and other partners.

Claims by Betancourt's mouthpieces, to the effect that he is a legitimate businessman, are entirely unacceptable. This site extends a public invitation to Adam Kauffmann, Jon Sale, Rudy Giuliani, and Frank Wohl to present one bit evidence, of one legitimate deal, that Betancourt may have done in his life. Just one. Regardless of jurisdiction.

The power contracts were obtained through payment of bribes, facilitated by Nervis Villalobos. With the billion Derwick overcharged, it expanded into oil (Gazprombank Latin America Ventures and Pacific), sunglasses, banking, money laundering at PDVSA, etc. Every single deal harks back to the first stolen billion. Every last cent "made" by Betancourt is corruption proceeds.

As per Luxembourg, we exposed Betancourt's "business activities" in that jurisdiction in 2016, 2017 (see below). It is refreshing to see Le Monde doing the kind of work required to flush out these thugs, which is something we've been doing for over a decade. About time, though frustrating to see professional journalists plagiarising and misinforming the public on these issues. 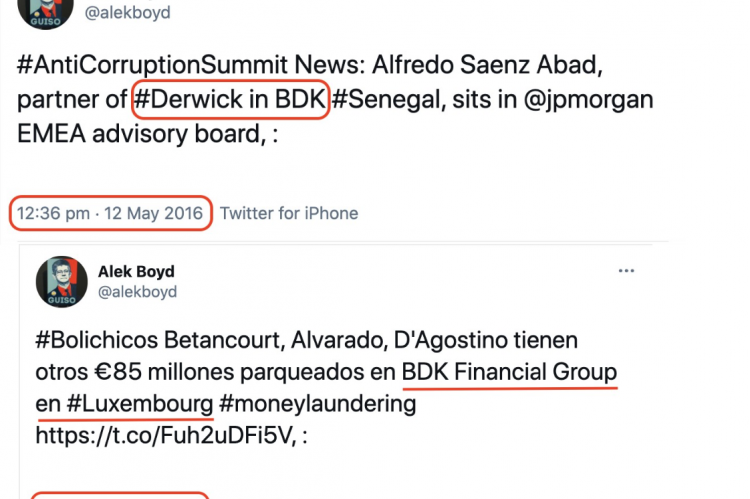