There's a case currently being disputed in London courts, whereby Wilmer Ruperti is suing Novoship for breach of a settlement agreement. Burford Capital, and its executive Daniel Hall, have been lumped with defendant Novoship for making unlawful use of information -without Novoship's knowledge or consent- obtained in the course of due diligence checks and investigation for which Novoship had retained Hall. The background is here. But in yet another fantastic twist, Ruperti is claiming Rafael Ramirez led a "vendetta" against him and his companies that originated "...from the fact that Mr Ruperti had refused to transfer to Mr Ramirez a half share in a Venezuelan television station which Mr Ruperti owned and which Mr Ramirez had demanded." (bold added). Hence, Ruperti is accusing Ramirez of extortion.

Documents filed by Ruperti's camp in response to requests for further information contain the following about Ramirez:

"They related to the general conduct of PDVSA and PDVSA Petróleo towards Mr Ruperti and his companies over a number of years, which had caused Mr Rupert[i] and his companies loss and which ultimately sprung from a vendetta which the President of PDVSA, Mr Rafael Ramirez, had been carrying on against Mr Ruperti and his commercial interest, ultimately arising from the fact that Mr Ruperti had refused to transfer to Mr Ramirez a half share in a Venezuelan television station which Mr Ruperti owned and which Mr Ramirez had demanded. In view of the political situation prevailing, the nature of the relationship between Mr Ruperti and PDVSA, and the identity of the senior management of PDVSA at the time, the letter had been couched in veiled terms".

Further questions as to details of "Venezuelan television station which Mr Ruperti owned and which Mr Ramirez had demanded", Ruperti claimed it was Canal i.

With respect to manner in which the alleged extortion had taken place, Ruperti claimed:

Rafael Ramirez's brother in law, Baldo Sanso, is well known to all of us, as the former go-to thug for many commercial deals involving PDVSA during the golden years of plenty. Sanso, in fact, boasted to Guardian's journalist Rory Carroll that companies seeking to do business with PDVSA "...paid $2 million each just to meet me..."

Ramirez's time at PDVSA's helm saw income in excess of $1.3 Trillion USD. It is not a typo. During Ramirez's reign, Ruperti went from being a tanker master to multi millionaire status. Sanso also became a phenomenaly wealthy individual, and so did Ramirez, who like his brother in law lives in the lap of luxury, in Europe, without having to work thanks to little side deals he personally approved, like this one.

Ruperti is no saint, we are not fans, but if there's anybody who would have Ramirez's number he's got to be one of the best candidates out there, having greased a hand or two in his "business career" in order to get no-bid deals from PDVSA. Ramirez not only allowed levels of corruption not seen anywhere else in the Western Hemisphere to, literally, destroy PDVSA, but he actively fostered it by using intermediaries to deal with Ruperti's ilk, such as Sanso, whose only contribution was to ensure that every major deal would leave a nice cut for Ramirez's clan. It wasn't just Sanso though: criminal probes in other jurisdictions have shown how Ramirez counted on Nervis Villalobos and on (cousin) Diego Salazar, to name just two, to demand bribes to all and sundry. From a previous post:

People following Venezuelan corruption keep wondering: how come Ramirez has not been charged? Let's do a non-exhaustive recount:

Ruperti continued on the topic of extortion:

"Mr Ramirez commenced his vendetta in 2007. It ended in December 2014, with the conclusion of the Payment Agreement. Mr Ruperti was only able to bring the vendetta to an end through an appeal to highly placed political allies (won through his role in supplying the country with oil during a 2002 strike by PDVSA) to exert pressure upon Mr Ramirez." (bold added)

Read, Ramirez' little extortion racket with Ruperti must have started in 2007. The referred "payment agreement" of December 2014, was a "settlement" between Ruperti and PDVSA (approved by Ramirez's cousin Jesus Enrique Luongo of course), whereby Ruperti got $230 million, $62.4 million of which ended up in an account at Banca Zarattini that belonged to a shell (Intercontinental View Inc) whose ultimate beneficiaries were Ramirez / Sanso. 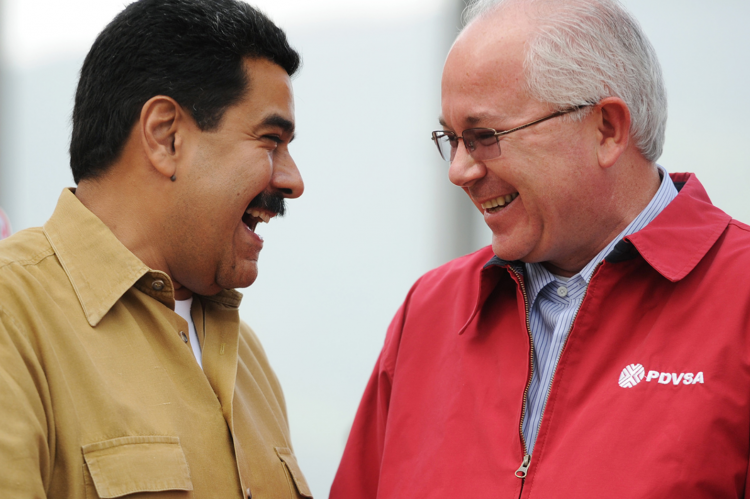