Is former FSB Vladimir Anisimov a partner of Derwick in Venezuela?

A PDVSA source recently shared some puzzling information about operations of Petrozamora, a joint venture between Corporación Venezolana de Petróleo (CVP) and Gazprombank Latin America Ventures B.V., an Amsterdam shell controlled by Boris Ivanov, Christophe Gerard, Francisco Convit and Orlando Alvarado. Email exchanges related to Petrozamora operations, and seen by this site, include a name hitherto unknown to this site: Vladimir Anisimov, elsewhere identified as a former deputy head of FSB, and head of security for oligarch Igor Kesaev, in turn connected to Gazprom in the past.

This site broke the news about Derwick Associates connection to Petrozamora through Gazprombank Latin America Ventures. Rafael Ramirez approved the deal, and personally signed it during a public presentation with Ivanov, but failed to ever inform or even mention that Derwick's thugs where part of it (see pdf below). Convit is the UBO of Derwick Associates and Derwick Oil & Gas. Convit was indicted, and declared a fugitive by the U.S. Department of Justice, for his involvement in a $1.2 billion money laundering scandal centered in PDVSA. That's not the only money laundering scheme in which Convit and Alejandro Betancourt are involved. Alvarado is the CFO of Derwick and other such shells (O'Hara Administration) used by Convit and Betancourt to launder some of their ill gotten funds.

Ivanov and Gerard were / are basically the proxies of Gazprom / Gazprombank in the deal. There are others, of course, like Igor Gitman described in PDVSA's website as "Gazprombank Trade Director".

But Vladimir Anisimov is not somebody this site has ever come across before in the context of Venezuelan - Russian energy business. Could this be just a coincidence, or rather, could it be that one of Putin's favourite oligarchs (Kesaev) placed his trusted former FSB Deputy Head of Internal Security ("FSB within the FSB") in a strategic position, so that the boss can keep an eye on his interests in Venezuela?

Two days ago this site reported on the new role Gazprombank Latin America Ventures is alleged to have taken in relation to PDVSA's accounts receivables after Treasury sanctions. It is evident that through alleged set up with VTB Bank, Convit, Betancourt, Ivanov and co are laughing at U.S. government sanctions regime against Nicolas Maduro and Putin-controlled companies. While Gazprom, Gazprombank and VTB Bank were already sanctioned as part of U.S. measures against annexation of Ukraine in 2014, connections to Venezuela (through shareholding in Evrofinance Mosbarbank and Petrozamora) seem to have escaped Treasury officials.

To obfuscate matters even further, Reuters came up with a post (March 14, 2019), where it claims that a Gazprombank source had informed that "its indirect stake" in Petrozamora had been sold to "a group of investors which have no connection to the Gazprombank group." And yet, Igor Gitman continues to be copied in email messages, along Anisimov. Why would Gazprombank / and former FSB's heads be kept in the loop, if Gazprombank had "sold" its interest in Petrozamora?

Request for comment sent to Nynas, PDVSA and Orlando Alvarado were not replied. 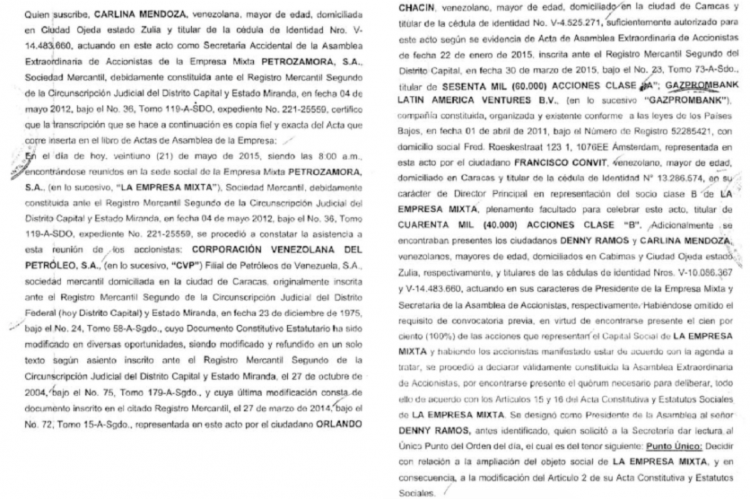