"GPB Global Resources BV is based in the Netherlands, but it’s run by Boris Ivanov and Sergey Tagashov, both of whom also worked for the Russian government in the past. In the last year, GPB steadily pumped about 10% of Venezuela’s oil in a joint venture with Petroleos de Venezuela S.A, the state-run company known as PDVSA. The operation, named Petrozamora SA, is operating with no company-specific sanctions in the Maracaibo region that helped establish Venezuela as an oil power in the 20th century."

No international outlet picked on the story. In May 2018, a local group of "investigative" journalists "broke the news" about Derwick's connection to Ivanov et al through Gazprombank Latin America Ventures B.V., the shell used to form joint venture Petrozamora with PDVSA.

GPB was founded in 2011, the year before Petrozamora was created. Control of GPB sits with Ivanov and Tagashov, who serve as two of the company’s three managing directors, along with Vladimir Shvarts, whose focus is on Africa and the Middle East.

Bloomberg does not mention Vladimir Shvarts' current activities, in Sweden, where he has appointed legal counsel that claimed to speak for Petrozamora, and is trying to illegally misappropriate ~$360 million that Nynas owes to Petrozamora.

Bloomberg claims that Francisco Convit "was an outside director at Petrozamora from 2015 to 2016, according to Venezuela’s Official Gazette." This is misleading, to say the least. Convit's association with Petrozamora did not end in 2016. Amsterdam registry papers related to Gazprombank Latin America Ventures B.V. indicate that Convit was director since September 2012 until 4 April 2016, when Alvarado seems to have taken over the role.

However Alvarado is simply an employee of Derwick Associates, and as recently as February 2019 was berating Nynas' Venezuela Quality Manager for its decision to return a cargo to Petrozamora.

Bloomberg did not consider appropriate to mention that Convit is a fugitive wanted by U.S. Justice.

This site has published plenty about Gazprombank Latin America Ventures B.V. and its "parent" GPB Global Resources since 2016. Even more so about Convit, Alvarado et al.

Bloomberg claims that Petrozamora "is operating with no company-specific sanctions..." disregarding that 1) PDVSA and its entities are sanctioned; 2) Nynas requires special OFAC licenses to carry on with a bankruptcy and reorganisation process triggered precisely because of its commercial relations with Petrozamora; 3) GPB Global Resources B.V., and Gazprombank Latin America Ventures B.V. are, both as a matter of fact, Treasury-sanctioned entities.

Describing Bloomberg's reporting as shoddy is an understatement. Not only it distorts the picture and makes false and inaccurate claims, but it fails to cite / attribute information first revealed elsewhere. 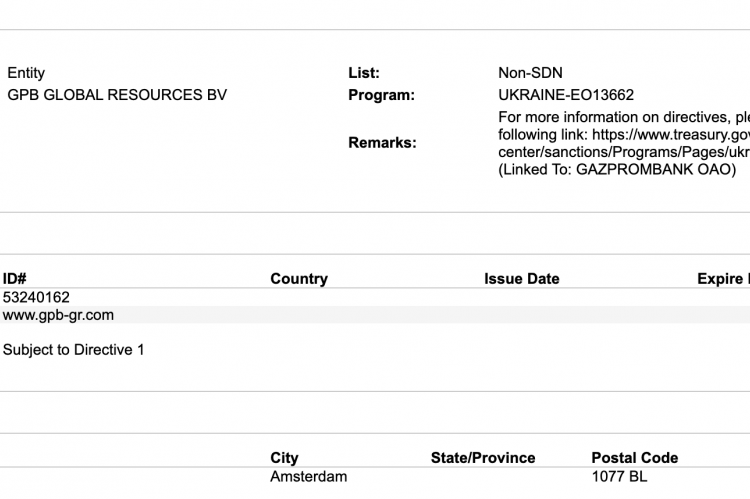