Friend of the site Katharina Bart alerted us yesterday to a press release from FINMA, the supposed financial services regulator of Switzerland:

"The Swiss Financial Market Supervisory Authority FINMA has concluded two further proceedings focusing on Venezuelan business relationships. In these, it found that Banca Zarattini & Co. SA along with CBH Compagnie Bancaire Helvétique SA breached their obligations to combat money laundering and seriously violated supervisory law. It has imposed measures on the banks as a result. The conclusion of these two proceedings brings to an end all enforcement proceedings against banks in the context of Venezuela and in particular linked to PDVSA."

"FINMA was in contact with over 30 Swiss banks in connection with alleged cases of corruption in the context of Venezuela and in particular linked to the Venezuelan oil company PDVSA. FINMA investigated whether and to what extent the banks were involved in this case and whether the provisions of Swiss supervisory law were upheld. FINMA ultimately opened five enforcement proceedings in order to investigate specific information it had received regarding possible violations of money-laundering rules. These proceedings have now all been concluded." [bold added]

The five "enforcement proceedings" concluded involved Credit Suisse, Julius Baer, Banca Credinvest, as well as Banca Zarattini and Compagnie Bancaire Helvetique. All five cases are so egregious that severe slaps of the wrist were warranted. FINMA, however, has not filed a single criminal charge against perpetrators.

By our estimates, Compagnie Bancaire Helvétique (CBH) has been actively involved in laundering well over $6 billion worth of public funds stolen / misappropriated in Venezuela. Unlike in FINMA's vapid release, it is not that CBH "were in breach of obligations to combat money laundering and their duties to put in place an appropriate risk management policy" or that it "failed to carry out sufficient economic background clarifications into business relationships and transactions with increased money-laundering risks." No. 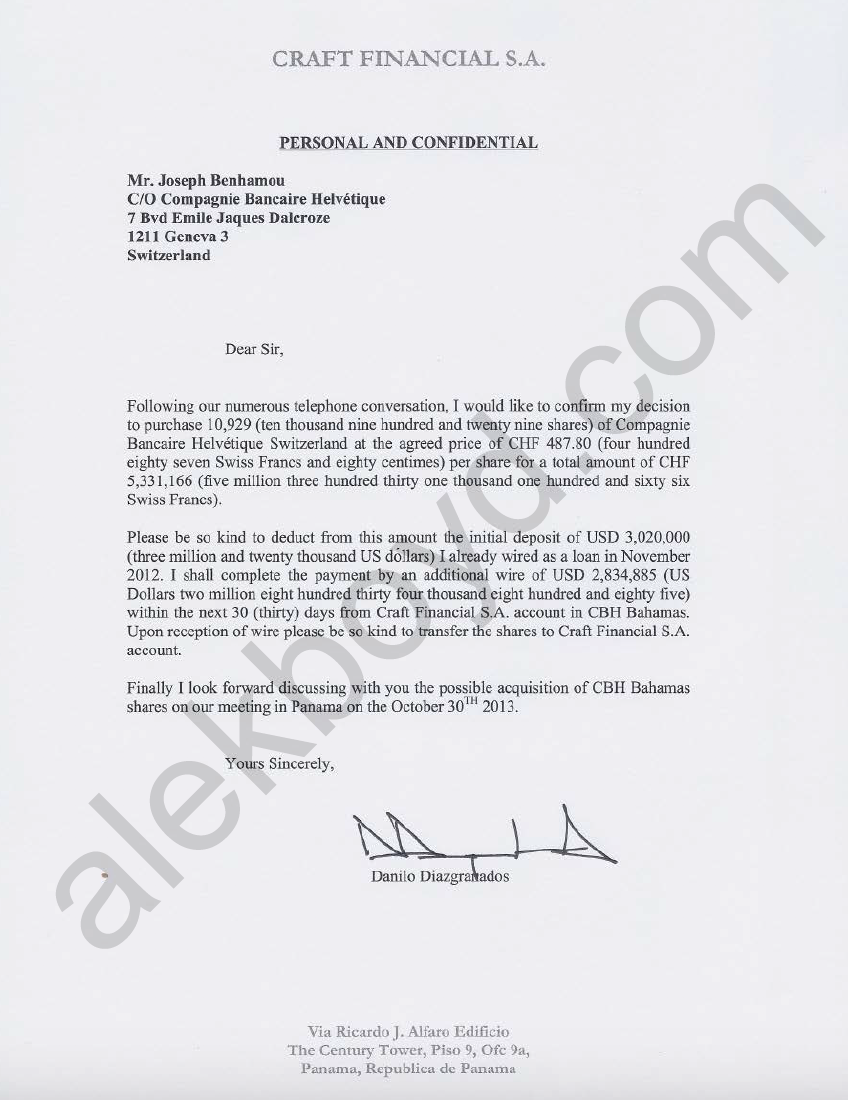 A source familiar with Benhamou, de Beaumont and CBH participation in the Oberto scheme informed this site that CBH laundered $2.75 billion worth of PDVSA funds. EFG launderded the rest: $1.5 billion as per an internal  compliance report produced by Pablo Custer.

But $4mn is not it, but the $1.5 billion worth of @PDVSA funds that former @EFGInt employee Pablo Custer said the Oberto bros hd laundered through that bank… pic.twitter.com/VLFVTPlMCZ

CBH's Venezuela exposure didn’t end there, of course. Benhamou & co were also in bed -at the very least- with Danilo Diazgranados during his gig with Venezuela's Treasury, ditto Raul Gorrin, with Derwick Associates, and with Alex Saab, hence our estimation above.

Banca Zarattini, on the other hand, was the venue chosen by Rafael Ramirez to receive a $62.4 million bribe into a bearer-shares Panamanian company called Intercontinental View Inc. That's just one deal, with Wilmer Ruperti...

It is, quite simply, impossible to consider FINMA as anything other than a patron to criminal organisations. Given the composition of its board, it can hardly be expected to act as a proper financial watchdog. FINMA allows for billions of dollars to be laundered and only springs into harmless administrative "enforcement" when unavoidable evidence can no longer be ignored. Its enforcement actions are a joke. Its continuous decisions to ensure viability of money laundering -in all Swiss banks found involved by authorities in other jurisdictions- amounts to official sanction of criminal behaviour. Shutting down probes related to the largest corruption scandal of the 21st Century (Venezuela / PDVSA), after just five -out of all Swiss banks partaking in laundering Chavismo's loot- is inexplicable, and almost certainly unlawful.

Even DoJ-wanted fugitive Raul Gorrin is posting evidence of his corruption at EFG and HSBC online, but this of course never makes it to FINMA's offices.

FINMA singled Zarattini and CBH out in latest "enforcement", but let EFG, HSBC, UBS, Gonet, Mirabaud and very many others -all of which money laundering concerns in FinCEN's sense of the term- off the hook. Despite claiming in its website that money laundering is a "criminal offence punishable by the criminal authorities (Art. 305bis of the Swiss Criminal Code)", a strict and ever so idiosyncratic Swiss policy of "see no evil" has in FINMA one of its finest exponents, after all someone has got to launder the world's black money, eh?