The question is still quite pertinent. Yesterday, Ian Talley at the Wall Street Journal posted "Morgan Stanley and Interactive Brokers Face Federal Scrutiny in Venezuela Probe" The FBi and SEC probe is basically a dive into the deals of one Luis Mariano Rodriguez Cabello, trusted lieutenant and favourite proxy of Diego Salazar, in turn first cousin of Rafael Ramirez. Thanks to Ramirez, Salazar became PDVSA's principal insurance provider, as well as intermediary in multi billion dollar contracts between PDVSA and Chinese companies. Ramirez just wasn't going to forgo his cut in bilateral agreements between Venezuela and China.

All of it has been meticulously documented and exposed in an ongoing criminal probe related to Banca Privada d'Andorra (BPA) -money laundering concern of choice for Salazar & co-, as well as in a book entitled "Las Siete Plagas de BPA" by Ricard Poy.  And all of it started with a tip: a €99.980 tip that Salazar had sent to a hotel staff in Paris, where he used to go on shopping sprees. Paris is also relevant to Talley's story: law firm FTPA (Coralie Oger) and money man Jean-François de Clermont-Tonnerre were retained by Salazar for money laundering purposes. Salazar's right hand man (Rodriguez Cabello) was, of course, at the core of it all.

Talley identifies Mark Coffey as the whistleblower who tipped SEC authorities about Rodriguez Cabello's money movements. Coffey "served as a compliance officer for Capital Guardian and Avenir" as per Talley's article, which described the flag raising operations:

The Venezuelans’ funds at BPA were frozen by the Andorran court, but $200 million was released, according to a November 2016 Treasury intelligence report, a copy of which was reviewed by the Journal. Soon after, Mr. Rodriguez and several of his associates transferred $107.5 million to his corporate account at Morgan Stanley, according to the intelligence report.

Morgan Stanley came to suspect those funds—received in 15 wire transfers between October 2014 and November 2015—were from the released BPA funds, according to the report.

In releasing those $200 million referenced, disbarred attorney Baltasar Garzon -retained by Salazar- had a role. Dominic de Villepin was also retained for the purpose by Salazar.

Ramirez, is the ultimate culprit not only in this instance but in about every single Venezuela-related criminal case currently pursued by the U.S. Department of Justice. In light of piles of evidence about Ramirez's web of corruption that have surfaced in different jurisdictions, all of which in DoJ's possession, it strains credulity that he remains unindicted.

Life is otherwise looking peachy for Ramirez. In Andorra, the Cierco brothers (money launderers behind BPA) are stonewalling the Prosecutor's probe to no end. Being arguably the wealthiest family in Andorra helps, and having über corrupt commisar (and Garzon associate) Jose Villarejo as Mr Fix It, certainly gives a taste of how clean and innocent the Cierco thugs are.

A court in Madrid, where BPA suffered a blow through a subsidiary (Banco Madrid) integral to the money laundering operation, ruled recently that there was no evidence of wrongdoing. Spanish authorities must have missed all of that real estate acquisitions by Venezuelan criminals and fugitives with funds originating at BPA.

In Rome, where Ramirez lives in an apartment bought by associate Nervis Villalobos with funds that originated from BPA, a court recently refused his extradition to Venezuela according to his Italian lawyer. Comment requests put to Italian law enforcement authorities as to whether or not money laundering is a criminal offence in that jurisdiction remain unanswered. Those deals that Ramirez penned with ENI are certainly returning dividends.

In Portugal, where Ramirez is at the core of Banco Espirito Santo probe, authorities are yet to name / indict him.

And in the U.S.? Well, perhaps none other than Abbe Lowell (Ivanka Trump's and Jared Kushner's lawyer) might shed some light. Lowell, and a deal under false pretences somewhere in the Trump administration, is perhaps the only plausible explanation left to explain why Ramirez remains free. After all, thugs of less relevance involved with Ramirez -such as Derwick's Alejandro Betancourt- have already been referred to by their mouthpieces as "matter of national security." 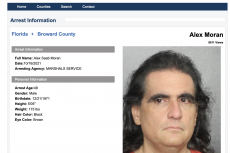