The recent record of U.S. government intervention in Venezuela sucks. Is out with Operation Condor and Washington Consensus, in with putsch by tweet. Regime change nowadays is by betting on the wrong horse, siding with cabals of entirely useless allies, while continously overestimating charlatans and underestimating chavismo, which is the most formidable foe to have ever come out of Latin America. What the world needs, what the region and Venezuela, in particular, need is more Charlie Wilson and less John Bolton. For make no mistake: chavismo will never relinquish power no matter how nicely the question is put.

Early in 2019, days before Juan Guaido appointed himself interim president in the middle of the street, American diplomatic sources confided that Leopoldo Lopez was the man. The reasons may be revealed in the years ahead, but for now, we must accept that Lopez had not only the Harvard Master but the better team of lobbyists in DC. Preference for Lopez couldnt' have been established along performance, political chops, or consensus building capability, for he remains Venezuela's most toxic figure, next perhaps to Diosdado Cabello. The truism that Lopez "may be a son of a bitch, but he's our son of a bitch" explains why he is, still, after direct involvement in a string of monumental fuck ups, at the forefront of Venezuelan opposition politics.

The men tasked by Donald Trump to deal with the Venezuela problem will have to answer one day. First exhibit is, of course, John Bolton, who tweeted recently:

Tomorrow is the first anniversary of the Opposition effort to overthrow the brutal and oppressive dictatorship of Nicolas Maduro. The people of Venezuela still suffer & die in a growing humanitarian crisis. Stay tuned for more tweets.

That effort that Bolton thinks is cause for celebration was a farce. A coalition of DoJ-wanted utterly corrupt boligarchs, Venezuela's Supreme Court chief, chavista narco generals, and Lopez of course, were going to oust Maduro. In reality, the only "accomplishment" that Bolton can get contentment from is that Lopez changed house arrest addresses. The failed plot was a triumph, for chavismo. It revealed, yet again, just how unhinged Lopez and Guaido really are.

Now Bolton wasn't the only Trump official privy to the plan, was he? Raul Gorrin's and Cesar Omaña's machinations with Maikel Moreno and Vladimir Padrino weren't sanctioned solely by Bolton, were they? Or are we to think that the Trump administration was completely oblivious about it?

Fast forward about a year, and a second putsch is announced. By tweet, as promised by Bolton on 29 April, the "anniversary" of previous "effort to overthrow the brutal and oppressive dictatorship of Nicolas Maduro". Donald Trump is copied. Jordan Goudreau, a former Green Beret, decorated and everything, with tours in Iraq and Afghanistan who lives with his dog, Finn, was to remove Maduro. At least, that was the plan pitched to Guaido and his "strategic committee", led by "reputed" political strategist JJ Rendon.

Some due diligence must have been done on Goudreau. Asked about it, Rendon replied to this site by saying that, yes, due diligence was done and for that reason they decided against entertaining Goudreau.

Before that decision, however, Rendon and Guaido signed a contract with Goudreau. Before cutting ties with Goudreau, Rendon paid him $50,000, allegedly from his own pocket. Before cutting ties, high officials of the Guaido "government" met and discussed plans with Goudreau. Lopez, code named Lima Lima, was of course kept au courrant. It has, in fact, been revealed that Lester Toledo, a trusted collaborator of Guaido involved in theft of humanitarian aid funds in Colombia, introduced Goudreau to Lopez and to Cliver Alcala, a chavista thug wanted for terrorism, corruption, and drug trafficking.

More importantly, while Guaido first denied any knowledge or links to Goudreau, Rendon not only confirmed it to CNN, but a recording emerged of Guaido speaking to Rendon and Goudreau saying he was going to sign the contract, so he could "get to work". Guaido's signature is in the contract, along Goudreau's, Rendon's, and Sergio Vergara's (another Guaido aid).

This is Lopez / Guaido's second swipe in a year, at the international goodwill, political, financial and legal support given to Venezuela's most distressed. We have admonished American officials, both privately and publicly, see here and here, on the perils of trusting Lopez and Guaido. In July last year this site argued:

January of 2020 will come, and chavismo, without a shred of a doubt, will still be in command. With that scenario in mind, American Senators and Congressmen have perhaps more power to assist in solving the crisis that any other group. But as everywhere in the Western world and to the benefit of enemies of democracy, navel-gazing takes precedence. There was talk about passing a law, VERDAD Act, that could if enacted create a task force to deal with the problem. Such task force, a Helms-Burton 2.0 of sorts, could just make Maduro's life hard enough to force him to sit for meaningful negotiations. Such task force should hit not only Maduro though, but all of its partners, wherever they are and whoever they may be.

It is May 2020. Not only the scenario has not changed, chavismo is in much better shape.

We were the first exposing harebrained "quick fix" plans, back in October 2018. Erik Prince met with Venezuelan opposition in late 2018, and again with Guaido's financiers in February 2019. Prince was pitching his services for $40 million. Even chavista beasts Rafael Ramirez and Hugo Carvajal knew of Prince offers. There were no takers.

The question is: what's Donald Trump's government stance in all this? Is there a stance, a policy, or is it "we'll keep this reality TV impro show, with incapable officials till "something" happens"? What do Trump officials have to say for themselves?

The U.S. government knew of last year's plan, as it knew of Goudreau's charade. Rendon lives in Miami, his colleagues are frequent DC visitors. Who is sanctioning this? Who is responsible? I asked Rendon whether State Department officials or Office of Special Assistant to the President knew about his plan with Goudreau. He said they did not, and the fact that chavismo had infiltrated the plan meant Goudreau's botched coup was "self stage" (sic). That answer stretches credulity beyond acceptable, considering Colombian (training camps had been set up by Alcala and Goudreau there) and American officials knew what was going on much before Goudreau's taking to Twitter to announce his coup.

This site sent a set of questions to Rendon. Some of them were answered immediately, rushedly, without proper consideration, and in the only manner known and employed by Venezuelan politicos and their operators. Others remained unanswered. Accountability, transparency, and strategic planning are beyond these people's grasp. They have no concept of trying to get ahead of the game. Added 12/05/2020: JJ Rendon resigned.

The take away message is that Venezuelans' prospects will undoubtedly be better served by the Trump administration forcing some kind of compromise with chavismo. Lopez and Guaido are utterly useless and have a phenomenal, irrefutable and very public track record to prove it. Tutelage is an odious term, in most parts of the world. Chavismo, in power for over 20 years now, has been under Cuba's tutelage, then arguably under Russia's, unquestionably under the criminal gang that runs the country. It may come as a surprise to some, but this site believes America and the other countries that support the cause of freedom and democracy in Venezuela, must subject Venezuela's opposition establishment to its tutelage, and ought to condition any further support on a set of criteria that must do away with any chance of entertaining two bit megalomanic imbeciles like Guaido & co. The opposition thinks they know better, alas their delusions of grandeur only produce failure.

Transition, if it is ever to occur, has to be negotiated with those who have power, rather than with power-deprived, power-mad deranged irrelevants. America can, and is in the perfect position right now, to drag chavismo into negotiating. It has to keep pressuring any and all who dare oxygenate Maduro. Outsourcing the ousting of Maduro to a bunch that have been at the mercy of chavismo since 1999 is just idiotic. It will never succeed. Can we please have more Charlie Wilson and no Marco Rubio? Can we please have Operation Cyclone instead of "operación gedeón"? 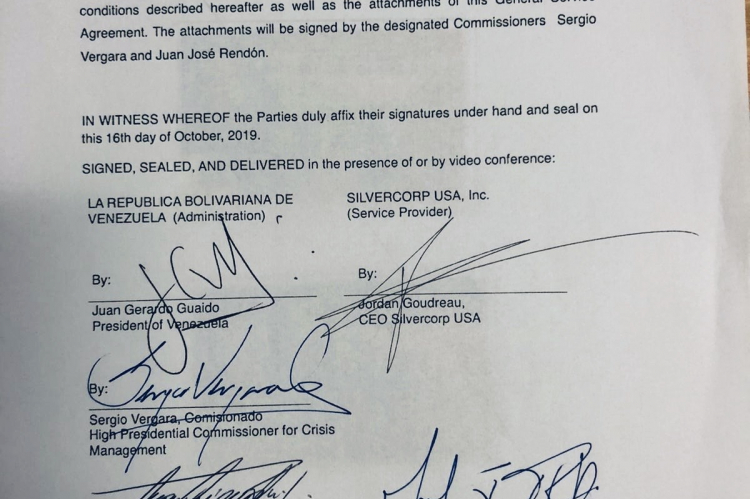