UPDATED: Maduro & Guaido to battle for PDVSA in Swiss criminal probe against Helsinge

UPDATED 1/5/2020 - 5/52020 | The whole thing started shortly after Juan Guaido swore himself in. Given this site's extensive coverage of PDVSA US Litigation Trust cases, one civil in Florida (dismissed) and another criminal in Geneva, we wanted to posit that a fresh legal team ought to be appointed to represent PDVSA in Swiss proceedings. Imagine the surprise upon finding that Jose Ignacio Hernandez -legal expert drafted in Florida case by Helsinge, Lukoil, Glencore, Trafigura et al- was "picked" by Guaido to become "Procurador", an Attorney General* of sorts in his "interim Presidency". We said then that an inescapable conflict of interest made Hernandez's represention of PDVSA impossible: a legal expert acting against PDVSA in Florida could not undertake PDVSA's representation in Switzerland.

Despite existence of sufficient number of non-conflicted, properly qualified attorneys that could have been selected, Guaido went along with imposition of Hernandez. Consulted sources claim that appointment was due to maneuvers of both Henry Ramos Allup and Leopoldo Lopez, two of the four main leaders behind Guaido's "government". Ramos Allup and Helsinge's Francisco Morillo go back a long way. Morillo was, in fact, employer of Ramos Allup's son. Lopez's other lawyer (Juan Carlos Gutiérrez) was hand picked to "recover Venezuela assets". Neither have any track record, whatsoever, in the field of asset recovery.

By own admission in court's testimony, Hernandez has been involved as legal expert in five cases involving Venezuela / PDVSA prior to being appointed by Guaido: two arbitration cases related to Owens-Illinois, two cases related to Crystallex, and the civil lawsuit that PDVSA brought against Helsinge et al. In all five instances Hernandez acted for parties against Venezuela / PDVSA.

Canonica has the advantage, as he initiated criminal proceedings on behalf of PDVSA in Geneva, in conjunction with David Boies' Florida actions back in March 2018. Canonica was brought in by Wilmer Ruperti, through Roberto Mirabal and Venezuela's official "Procurador" Reinaldo Muñoz Pedroza, whose appointment was also illegal...

Requests for comment were put to Hernandez and to Jacquemoud.

Hernandez replied by saying that he had recused himself from involvement with the case. He added that he can not be involved directly in casework, for that corresponds (according to Venezuelan legislation) to the Attorney General's office. Guaido, however, does not have an Attorney General. Further questions were put to Hernandez regarding his role in formulating Guaido's legal strategy in different  international cases against Venezuela / PDVSA. Further replies will be added here.

UPDATE 1/5/2020: Hernandez explained that legal activities regarding the case had started last year, and were coordinated through Guaido's representative in Switzerland (Maria Alejandra Aristiguieta, who announced her resignation recently). Hernandez claims ignorance as to appointment of counsel for Maduro's side of PDVSA (Guerric Canonica), adding that current Procurador (Reinaldo Muñoz Pedroza) could not appoint legal representatives for PDVSA. Hernandez claims that statute that underpins Guaido's interim presidency (art. 15) gives sufficient powers to his Procurador office to appoint legal counsel where it sees fit. In all, Hernandez stressed he did not know what was going with Helsinge's case in Geneva, who appointed Jacquemoud, or how much is Jacquemoud going to cost. END.

Jacquemoud replied almost immediately, saying client privilege prevented him from giving "any information" as per who retained him, how much are his services going to cost, and what legislation underpinned his work on behalf of PDVSA. It remains unclear how was Mr Jacquemoud picked and who appointed him.

Further communication with Jacquemoud turned bizzare rather quickly. Asked to explain what prevailing Venezuelan legislation allowed the Guaido "administration" to appoint him as PDVSA's legal counsel, and keep mandate details secret, Jacquemoud came back with an inane reply about observance to Geneva Bar rules.

The secrecy with which Guaido's team acts is remarkably similar to strategies employed by Nicolas Maduro through Reinaldo Muñoz Pedroza and Guerric Canonica. That is, they do whatever the hell they want and refuse to submit to scrutiny concerning PDVSA affairs.

What a clusterfuck this is. Switzerland does not officially recognise Guaido. Why would its judiciary allow his legal counsel, on behalf of a company he does not control, in a case that can only bring huge amounts of embarrassment to Switzerland's most cherished but utterly corrupt energy trading houses? The only parties that stand to win are those on retainer. The interests of PDVSA and Venezuela just could not have worse representation.

*A distinction needs to be made between Hernandez's official role as "Procurador" and that of "Fiscal General", which is the equivalent in common law systems to Attorney General. Prosecution is the remit of the Attorney General's office, or its designates, not that of the office held by Hernandez.

UPDATE 5/5/2020: Given Hernandez's claim that he had recused himself from the case, and that legal strategy and appointments had been coordinated with Guaido's representative in Switzerland, this site reached out to Maria Alejandra Aristiguieta to ask a bunch of questions.

Aristiguieta's replies are even more baffling than those of Jacquemoud, a lawyer she chose on the basis of recommendations (?).

Aristiguieta claimed to have analysed the case with Carlos Ramirez, a two bit useless Miami-based lawyer connected to Federico Alves, cheerleader of Henry Ramos Allup. Aristiguieta claimed that Ramirez and Alves wanted to go to Geneva, with Orlando Viera in tow, to put up some kind of a defence show, in which she refused to participate.

Aristiguieta thinks that the case ought to be dealt stealthily. She maintains that Switzerland recognises authority of Venezuela's Congress, and recognises acts of Congress, such as Hernandez's appointment, therefore prosecutor Olivier Jornot has to accept representations from Hernandez (?).

While arguing that she didn't have anything to hide, Aristiguieta refused to answer repeated questions about who was handling the case in Caracas, replying instead that Guaido's international representatives and PDVSA's ad-hoc members were in charge. She then said she wouldn't name names for she did not want to be quoted on this site, adding that including her comments here were "clearly a threat" of which we "have no right". 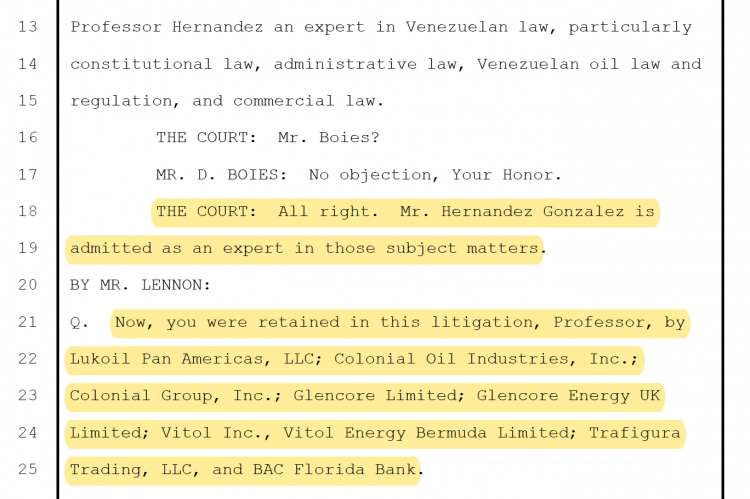